Justin Rose followed up his good start to the BMW PGA Championship at Wentworth Club on a crucial weekend of golf for Team Europe. 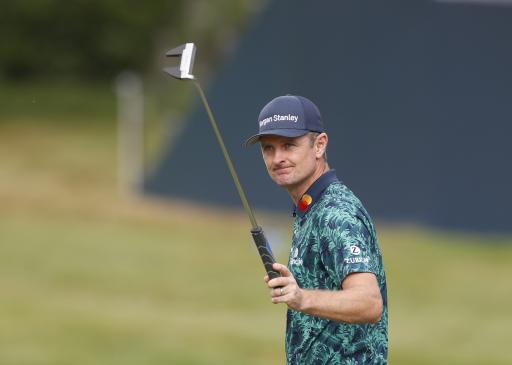 Justin Rose trails by three strokes after Kiradech Aphibarnrat consolidated his lead on day two of the BMW PGA Championship.

After 36 holes at Wentworth, Rose fired a second-round 68 and is in contention to win and book his Ryder Cup place automatically.

Ian Poulter, who is widely accepted to be a pick for the Ryder Cup, missed the cut shooting 1-under over two days.

He needed to birdie the last two holes to have a realistic chance of making the cut but found the water on 18 with his second shot.

Poulter chipped in with his fourth shot to thunderous applause but was visibly fuming with himself for missing the weekend.

Aphibarnrat will head into the weekend on 12-under-par just ahead of Laurie Canter who also surged into contention on day two.

The Thai golfer, who won back his PGA Tour card at the Korn Ferry Tour Championship, shot 4-under (68) to back up his opening round.

He said: "I just tried to play 36 holes without bogeys, but overall I'm really proud of how I've played the first two rounds."

Adam Scott, making his first appearance at Wentworth in more than 15 years, is also in the mix at 10-under-par.

He made a shakey start but shot a 69, two behind the leader.

American Billy Horschel moved himself up the leaderboard with a superb back nine and is at 9-under-par after shooting 65.

Bernd Wiesberger, chasing automatic qualification for Team Europe, shot 67 and is at 6-under-par going into Saturday.

RELATED: IGOLF: THE SERVICE THAT PROVIDES NON-CLUB MEMBERS WITH A WHS HANDICAP INDEX

Canter fired eight birdies in Virginia Water and is in the clubhouse at 11-under par as he searches for his maiden European Tour win.

Over his first two rounds, the Englishman has grabbed 13 birdies and one eagle.

Canter was asked why he played so well and he said: "Honestly if I knew I'd tell you - that's golf".

Rose sent out a message of Ryder Cup intent when he pencilled a starting round of 5-under-par.

And he consolidated on his good start, making six birdies.

Rose displayed his form of years past with a display of solid putting and a magnificent short game touch.

He left an uncharacteristically poor birdie putt miles short at 14, but he bounced back and birdied 15.

One of the highlights of his round included a sublime bunker shot at 13, picking the ball beautifully and making it stop with one check.

In the pouring rain, he got up and down at 18 sinking a 20-foot putt for birdie.

"I really don't feel like this course owes me anything, but I'd love to win this tournament" Lowry, 34, said ahead of a crucial weekend.

Also in the top 10 include Ryder Cup hero Jamie Donaldson (-9), who made three eagles in his round on his way to a 66.

Donaldson said: "To have three eagles in a round is unbelievable, you've got to keep grinding and keep pushing."

Team Europe's Ryder Cup confirmed duo of Tommy Fleetwood and Viktor Hovland are not too far back, both sitting at 5-under-par.

Lee Westwood had a frustrating front nine, carding three bogeys as he made the turn at 3-over-par.

But he rallied, making birdies at 17 and 18 to move him to 4-under-par for the championship.

It means there is still work to do over the weekend to confirm his place on the European side.

Marcus "the Bullet" Armitage forced himself into contention at the weekend after shooting 66 too.

His only blemish came at 18 when he made bogey after finding the hazard.

Armitage said his caddie wanted him to lay up but he was adamant he wanted to have - at that point - a putt for the lead.