Colin vs Collin: How Morikawa's Race to Dubai victory COMPARES to Montgomerie's

The Scottish Ryder Cup legend's 1995 season was a little bit different to the young American's... 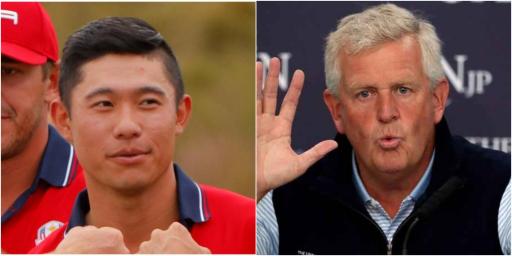 Colin Montgomerie is a legend of the European Tour having won the order of merit eight times between 1993 and 2005.

It was rebranded to the Race to Dubai with a massive cash injection and most recently it was won by Collin Morikawa.

Morikawa, 24, claimed the DP World Tour Championship in the process, picking up a huge pay day.

His talent cannot be understated and he'll win many more tournaments around the globe.

But something appears to be bugging the golf fans and purists.

His win may come as a kick in the teeth to full-time players on this side of the pond.

Morikawa was awesome today. But as for the Race 2 Dubai win -

This year Morikawa won the Order of Merit and played in 3 standalone events, finishing an average of 47th. pic.twitter.com/CZdFgaoslF

An interesting Tweet has popped up which compares Montgomerie's 1995 season compared to Morikawa's.

As you can see, Montgomerie played in 18 stand-alone events on the European Tour, winning twice.

Morikawa has played in three, winning once.

Montgomerie was dominant that season and remarkably consistent. He recorded 14 top-10s. It was his third order of merit title in a row.

Two weeks after claiming victory at Trophee Lancome, Montgomerie tasted his first ever victory at the Ryder Cup.

He beat Ben Crenshaw 3&1 in the Sunday Singles in the 31st edition of the tournament at Oak Hill, New York.

Montgomerie was inducted into the World Golf Hall of Fame in 2013 and has since won three senior major championships.

His final order of merit title on the European Tour came in 2005. Overall, he won 31 times.

To be clear, we are not knocking Morikawa.

But the fact he won the Race to Dubai by only playing three times shows how times have changed.

Montgomerie has legendary status on the now-redundant European Tour and rightly so.

But Morikawa? He's not there yet.

There was no beating Monty in singles pic.twitter.com/EPmMejHyVG