Jamie Donaldson watched his golf ball sail over his head during the opening round of the Kenya Savannah Classic. 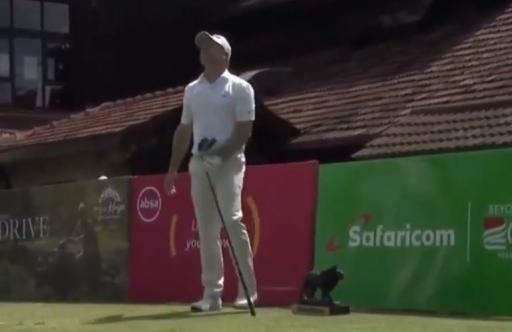 Jamie Donaldson hit one of the strangest drives we have seen on the European Tour this season during the opening round of the Kenya Savannah Classic.

The Welshman withdrew after shooting a 1-over par opening round, where on the 7th hole he hit a shot that he will remember for a long time.

Donaldson was level par through the opening six holes and he had a spring in his step after making a birdie at the 6th to cancel out his early bogey at the 2nd.

The driver was the club of choice at the par-4 7th, but Donaldson pulled his tee shot towards the trees and after the microphones picked up a loud thud, you only had to watch Donaldson's face to get an idea of where his ball was heading.

The ball sailed over Donaldson's head behind the tee and he had to play his next from beside the 6th green, roughly 30-yards away from the 7th tee box.

Jamie Donaldson saw his tee shot clatter against a tree and finish further away from the hole than it started during the opening round of the Kenya Savannah Classic. pic.twitter.com/RDg29VrwHQ

Donaldson had his work cut out from where he was and he almost salvaged a bogey, but lipped out from a short three-foot putt to score a double-bogey 6.

The current top 10 in the tournament features a mix of nationalities, with players from France, Spain, Germany, Northern Ireland, Kenya and Zimbabwe all contending in the latest European Tour event.