Min Woo Lee birdied the first playoff hole at the Renaissance Club to beat Matthew Fitzpatrick and Thomas Detry in a dramatic finish on Sunday. 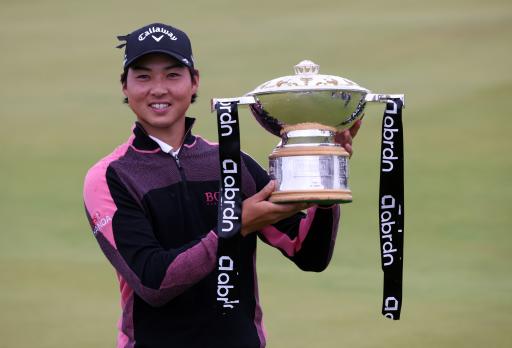 Min Woo Lee came out on top on a dramatic final day at the Renaissance Club to win the Scottish Open, beating Matthew Fitzpatrick and Thomas Detry in a playoff.

Lee made a birdie on the first playoff hole to beat his two opponents to claim his second European Tour title and climb to 61st in the world rankings.

On the same day that tennis superstar Novak Djokovic secured another Wimbledon title, Lee paid tribute to the Serbian after his win and described the inspiration that it gave him.

"It was nice to see Djokovic come in and do his interview," said the 22-year-old.

"I thought that was a good feeling and I might want to do that. It was an awesome day. I was pretty proud of the way I played and six birdies in a row was pretty sweet.

"It's crazy. I dreamed of it last night and to the people back home staying up late watching me and sending me messages, this one's for you too."

Lee, who began his round three shots behind the leaders Detry and Fitzpatrick on 11-under-par, made a scintillating start to Sunday with a stretch of six consecutive birdies on the front nine.

It was a packed leaderboard in North Berwick as Englishman Ian Poulter surged through the field with an incredible 63 to set the clubhouse lead of 17-under-par.

On a day that was delayed by the threat of thunder and lightning, Fitzpatrick and Detry remained calm and collected by making crucial birdies at the 16th hole to reach 18-under-par alongside Lee.

US Open champion Jon Rahm finished two shos back on 16-under-par, a result which sees him replaced as world number one by Dustin Johnson.

Lee took the playoff by the scruff of the neck. He fired his approach to the 18th hole in close, to no reply from his opponents. He rolled in his putt and passionately celebrated with his caddie.