Lee Westwood qualified automatically for the forthcoming Ryder Cup, then was back to his usual hilarious self on social media. 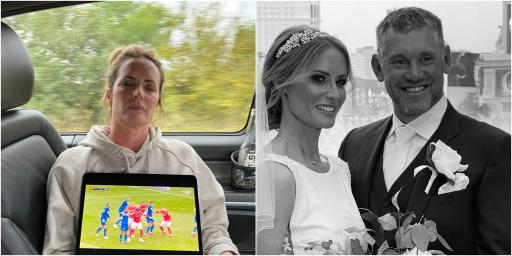 Lee Westwood certainly appeared to be back to his usual good-humoured self after qualifying for the Ryder Cup.

Westwood endured a tense weekend at the BMW PGA Championship at Wentworth in Surrey.

He admitted he couldn't focus on the right things as he appeared to be in a straight tussle with Shane Lowry to get the ninth spot.

Lowry did, but got the nod by captain Padraig Harrington to the dismay of quite a lot of Team Europe Ryder Cup fans.

Whistling Straits will be his 11th appearance and he will also tie for the oldest player to represent the European side since 1973.

Westwood appeared to be back in good spirits after the stressful weekend, mind.

How good is my wife!!! Not just a good caddie! pic.twitter.com/0Tvxy6XU7N

He posted an image of his wife and caddie Helen on Twitter appearing to be asleep with an iPad resting on her.

It was showing Nottingham Forest's match versus Cardiff City at the City Ground.

Westwood posted: "How good is my wife!!! Not just a good caddie!"

The image also showed an empty bottle of Corona.

Not just here for the hockey! We said I do! #VivaLasVegas pic.twitter.com/Ys0PRjHLJG

NEXT PAGE: GOLF FANS FUMING ROSE LEFT OUT BY HARRINGTON