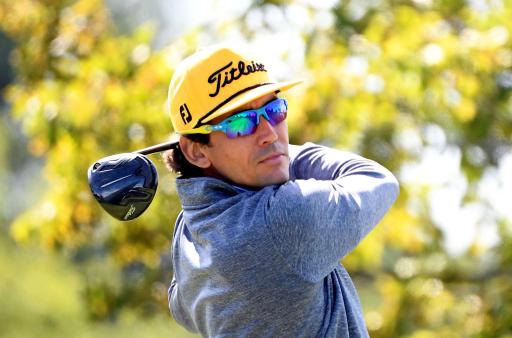 Having been on a four-year winless streak on the European Tour, Cabrera-Bello battled with Arnaus on the back nine and both players finished on 19-under-par.

When the pair went back up the 18th hole for the playoff, it was the 2016 Ryder Cup participant who made a cool birdie to secure the fourth European Tour victory of his career.

The 37-year-old became the 13th Spanish player to win in Spain and he will move up to a projected ranking of 30th in the Race to Dubai.

RELATED: THE BEST GOLF OUTERWEAR DEALS ON OFFER AT GOLFPOSER!

"I am very, very happy. I knew it was going to be a really hard battle today. I didn't get off to the ideal start and I have been believing in myself. I have had amazing support for all of this week," said Cabrera-Bello.

Another incredible escape, another eagle

"They (the fans) were rooting for me since the first minute and I was just hanging in there. I knew I would have an opportunity and I'm glad that the luck fell my way."

After a third-round 64, Cabrera-Bello led by two shots on 17-under-par heading into Sunday, but he began with a damaging double-bogey on the first hole at Club de Campo Villa de Madrid.

He dropped back to tie for the lead with Arnaus and Frenchman Julien Guerrier. Arnaus then took the lead with a fantastic eagle on the par-5 7th hole.

The World No. 187 made another amazing eagle at the par-5 14th hole. He was one ahead of Cabrera-Bello, but Scotsman Grant Forrest was also making a charge.

A putt to win your national open...

The 28-year-old made four birdies and an eagle in a five-hole stretch on the back nine and although he shot a 65 on the day, he could only reach 17-under-par for the week.

Cabrera-Bello, with the bit between his teeth, birdied the 13th, 14th and 15th holes to reach 19-under-par. This is what the Spanish duo finished on and the playoff began, the first all Spanish playoff on the European Tour since 1972.

But it didn't last long. In front of his family and his home crowd, Cabrera-Bello rolled in an ice-cool birdie putt on the 18th green to win on the first playoff hole.