BIGGA's Karl Hansell provides GolfMagic with an update on the things you may notice during your first round back... 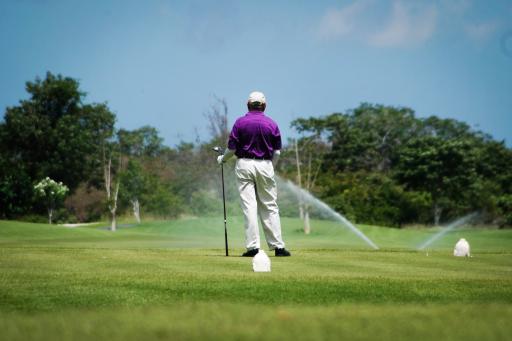 It may have felt like three years rather than three months, but golf is finally back in England on Monday March 29, and we quite simply cannot wait to head back onto the course.

While there will no doubt be plenty of shanks, hooks and tops at clubs up and down the country next week, we caught up with British and International Golf Greenkeepers Asssociation's (BIGGA) Karl Hansell to learn more about what we can expect to see from a golf course perspective.

Karl explained to GolfMagic a number of positives where the maintenance of golf courses is concerned right now, but also a number of negatives as a result of golf being shut out the past three months due to the coronavirus lockdown.

Starting with a positive and no golf for the past three months means no divots and no pitchmarks at a time when the soft ground throughout winter usually means they have caused significant damage. Last year the boom in golf numbers were estimated to have caused more than 8,000 extra pitchmarks and 18,000 extra divots on each course every month! But with a warm, dry March, the turf will have woken out of its spring dormancy and will be on the road to recovery – just make sure you fix any damage you make when you start playing again!

No golfers playing on the course when it’s wet means the ground won’t be as compacted. Compacted soil, caused by people walking on it in the course of their round, makes it difficult for the grass to grow (grass grows in the space between soil particles, so you may find that the turf is actually lusher than you may expect at this time of year. However…

Can Rory McIlroy and Jordan Spieth inspire others in the year of the comeback?
Could Keegan Bradley be the latest COMEBACK KID of 2021?

#3 - You may see aeration and topdressing taking place

Aeration – the process of punching holes into the green (and sometimes approaches) to open up air pockets in the ground – is considered among the most important tasks completed by greenkeepers throughout the year. Aeration enables them to relieve compaction, get seed into the ground for new growth and lay down topdressing – the layer of sand you sometimes see on greens – which keeps the surfaces firm, level and your ball rolling smoothly. Traditionally this has been done by using machinery to punch holes into the turf and you may notice this on the greens – but rest assured it’s only done to improve the quality of the playing surface!

Another way the grass will be healthier is that it won’t have been cut much over the winter period. A number of golf facilities will have furloughed staff to protect the business economically, while the incredibly wet weather we had throughout winter means it was physically impossible to get out and cut as often as greenkeepers would like.

The dry March will have gone some way to rectify that and in England the roadmap was laid out almost a month in advance (unlike Welsh courses who were told they could open with just 24 hours’ notice). But if turf has grown long, it can’t immediately be chopped back to a playing height as that risks stressing the turf, leading to increased disease risk and even potentially killing the plant. Rather, the greenkeepers will have steadily been lowering the cutting height over the past few weeks and doing other activities such as slitting in an attempt to remove any lateral growth.

With different resources available at different golf facilities, this process – and all of the other things mentioned on this list – will be taking place at different speeds, depending on how many greenkeepers there are and the tools available to them. You may find your course is at a different stage along this journey than another one nearby.

Can Rory McIlroy and Jordan Spieth inspire others in the year of the comeback?
Could Keegan Bradley be the latest COMEBACK KID of 2021?

Although they may not have been cutting, the greenkeepers will have been active, working on other projects throughout the winter, so you may find that the course actually looks quite fresh. Trees may have been trimmed back or removed altogether to improve sight lines and air circulation and increase the amount of light that gets on the green. Likewise, you may find water courses, ditches and streams have been cleared out and are better presented.

#6 - New tees and bunkers, although some projects may be unfinished

The closure of golf may also have enabled the team to do work on renovation projects, such as the rebuilding of tees and renovation of bunkers. With it being quiet on the course, you may find that these have been completed successfully and things look a little different out there.

However, when the roadmap for the return to golf was announced, greenkeepers will have switched their attention to preparing the course for play and so there is the possibility that some projects may not be completely finished, but the team will return to them as soon as possible.

Which leads us on to…

#7 - Overturned turf caused by birds such as crows searching for leatherjackets and grubs. This may lead to more GUR markers out on the course, although there will be other reasons for this…

Not all golf courses will suffer from this and as with all these points, golf courses are unique environments, with their own quirks and situations. However, spring is one of the key times for the activity of grubs in the soil that grow into leatherjackets (daddy longlegs) and chafer beetles. Where turf has been freshly laid or has shallow rooting due to other reasons, animals such as crows and badgers are really good at overturning the turf to access the food source below. You may find that areas of turf – usually around tees or recently refurbished bunkers – look like they’ve been churned up and soil is exposed. Ways to prevent this are primarily cultural and take significant time to implement, so patience is needed in the meantime.

#8 - There may be increased numbers of worm casts

Likewise, another situation that is difficult to rectify by the modern greenkeeper, who has access to fewer chemical solutions due to tightening legislation, is the presence of casting earthworms, which leave small piles of mud above the surface of the soil.

Worms are an incredibly-important species within the soil, helping it stay healthy and providing the nutrients to promote positive growth. You’ll find there aren’t earthworm casts on greens, but they are on the fairways and that’s due to the make-up of putting surfaces and the fact greens are comprised of dry, sandy soil with thick sward density. Unfortunately, these surfaces can’t be replicated across the entire course (nor should they be) and so you may see worm casts. Check your local rules to discover whether you can clean and replace your ball if you land among them.

One of the benefits of longer turf and reduced human traffic is that golf courses provide an incredible range of wildlife habitats. From water features and streams to wildflower meadows, forestry, heathland, grassland, sand scrapes and bunkers to countless other potential habitats, there almost isn’t an area of the golf course that isn’t useful for one form of wildlife or another and greenkeepers are increasingly working to improve these areas. Spending time with nature is a fantastic way to maintain mental health and when you return to the course you’re likely to find more of it than ever before.

#10 - The greenkeepers may be more visible

All of these activities are part of the greenkeeping team’s daily lives and with golf courses set to be incredibly busy over the coming year, it may be that the greenkeepers are more visible than you have come to expect. For example, you may see the greenkeepers nipping out between playing groups in an attempt to complete a task. Do take extra care when teeing up to ensure there isn’t anyone within range of your shot who may be seriously hurt if you hit them. And if you have any questions about the course, the greenkeeping team will be happy to talk things through to you, so don’t be afraid to ask.