Did you know about the new local golf rule on PROVISIONAL BALLS?

Brush up on your knowledge of provisional balls with our latest golf rules article. 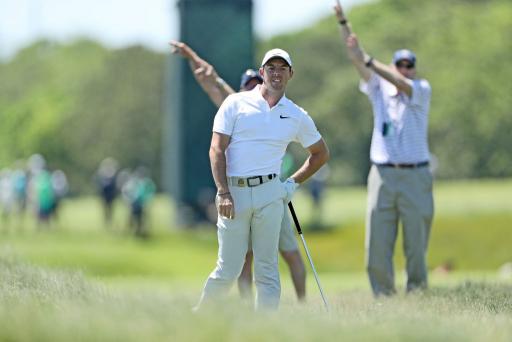 This one might not be used on the PGA Tour or in any club competitions up and down the country, but the new local rule concerning provisional balls should certainly prove a welcome addition when it comes to your friendly game with pals.

If anything, it prevents that red-faced walk back to the zip pocket to pluck another ball out the sleeve - and no doubt to the stifle of laughs from your so-called mates as you get set to reload once again from the tee.

Instead, a new rule has been implemented where you can stick a ball down from where you think the ball was lost, and take your medicine from there. It's only a local rule but it's been designed to help speed up pace of play, and we are for a bit of that thesee days.

Let's get one thing straight. This new local rule concerning 'balls lost or out of bounds' is not intended for higher levels of play.

However, it does permit club committees to allow golfers the option to drop their golf ball in the vicinity of where the ball is lost or out of bounds (this also includes the nearest fairway area) under a TWO-STROKE PENALTY.

So after finding OB with you tee shot, you will be dropping a ball down from where the ball entered the OB line and playing your fourth shot from there.

RELATED: DID YOU KNOW ABOUT GOLF'S NEW RELAXED RULES ON THE PUTTING GREENS?

One of the pros for this rule is that it addresses concerns raised at club level about the negative impact on pace of play when a player is required to go back under stroke and distance. In the process, this causes a logjam in traffic on the golf course and contributes to a slower pace of play.

But as we have already made clear at the top of this article, this new local rule will never be allowed - or not that we have heard yet at least - in club competitions or other elite tournaments.

We recommend you check on your club's noticeboard before teeing off to find out whether this rule is in place.

"Previously, once you headed off towards the original ball (approx. 50 yards from the tee as a rule of thumb), if you then played another from the tee it was stroke and distance even if you said it was a provisional," said PGA Rules Member Ashley Weller.  "That is no longer the case any more."

But as the case with many of golf's rules, there are a number of sub clauses to note. The R&A highlights everything you need to know about provisional balls under Rule 18.3, and you can check it out below...

PROVISIONAL BALLS: WHAT YOU NEED TO KNOW

a - When Provisional Ball Is Allowed

If a ball might be lost outside a penalty area or be out of bounds, to save time the player may play another ball provisionally under penalty of stroke and distance (see Rule 14.6).

For a ball that might be lost, this applies:

- When the original ball has not been found and identified and is not yet lost, and
- When a ball might be lost in a penalty area but also might be lost somewhere else on the course.

But if the player is aware that the only possible place the original ball could be lost is in a penalty area, a provisional ball is not allowed and a ball played from where the previous stroke was made becomes the player’s ball in play under penalty of stroke and distance (see Rule 18.1).

If a provisional ball itself might be lost outside a penalty area or be out of bounds:

b - Announcing Play of Provisional Ball

Before the stroke is made, the player must announce that he or she is going to play a provisional ball:

If the player does not announce this (even if he or she intended to play a provisional ball) and plays a ball from where the previous stroke was made, that ball is the player’s ball in play under penalty of stroke and distance (see Rule 18.1).

(1) Playing Provisional Ball More Than Once. The player may continue to play the provisional ball without it losing its status as a provisional ball so long as it is played from a spot that is the same distance or farther from the hole than where the original ball is estimated to be.

This is true even if the provisional ball is played several times.

But it stops being a provisional ball when it becomes the ball in play under (2) or is abandoned under (3) and therefore becomes a wrong ball.

(2) When Provisional Ball Becomes Ball in Play. The provisional ball becomes the player’s ball in play under penalty of stroke and distance in either of these two cases:

If the player plays a provisional ball into the same general location as the original ball and is unable to identify which ball is which:

NEXT PAGE: Did you know you could be DQ'd for breaking any of these THREE rules