The official golf rule that Happy Gilmore could have taken at 18...

It's an iconic golf film, but what golf rule would have been in place when the TV tower fell during Happy Gilmore's final hole? 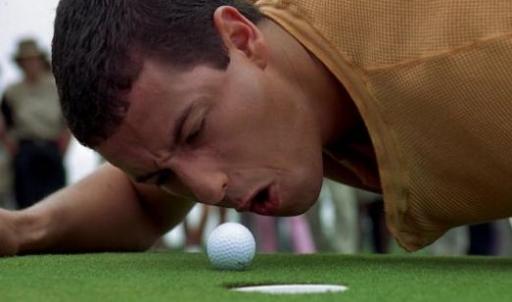 Happy Gilmore is the greatest golf film ever made. Yes sorry Caddyshack fans, I said it. It was one of my favourite films growing up and you're a liar if you say that every now and then you don't give the running bomb that Happy made famous a go at the driving range.

In the film, Happy and his arch nemisis Shooter McGavin are battling it out during the final round to win the 'gold jacket' that Shooter craved so desperately. It looked as though Happy had a simple putt to win, until this happened...

Now the movie wouldn't have ended so magically had Happy decided to play his shot around the tower, but what would the actual ruling had been if this movie was real?

"The TV tower in question is defined as a Temporary Immovable Obstruction (TIO), a non-permanent artificial object often erected in conjunction with a tournament which is fixed or not readily movable. The Rules for relief from TIO’s are quite complex, but do not contemplate a scenario when one is on a putting green, so in this instance we would revert to the standard relief for interference under Rule 16.1d (Relief from Abnormal Course Conditions (Including Immovable Obstructions)).

"It should be noted that this relief is optional, so Happy was entitled to play the ball as it lay. History will tell us that despite being given an incorrect ruling Happy Gilmore saw the shot via the windscreen of the VW Beetle, via the pipes and out of the scaffolding tube, took it on and holed it to the joy and amazement of Mr Larson, Lee Trevino and of course the lovely Virginia.

"Shooter obviously wasn’t so impressed and tried to escape with the Gold Jacket he claimed as his, but I think Mr Larson managed to recover it. Would history have turned out the same way if he’d taken the relief that was rightfully his? We’ll never know – we’ll probably never care either because it wouldn’t have made such a great ending to a truly iconic film."

So there we have it. The idiotic Tour official in the film was wrong to tell Mr Gilmore to "play it as it lies" but Happy also didn't have to take relief and thankfully he didn't.

We've seen some memorable putts over the years, but we all know who really made the most historic putt in golf and his name is Happy Gimore.