Nelly Korda is having a fantastic season on the LPGA Tour and her Olympic gold medal has propelled her to new heights. 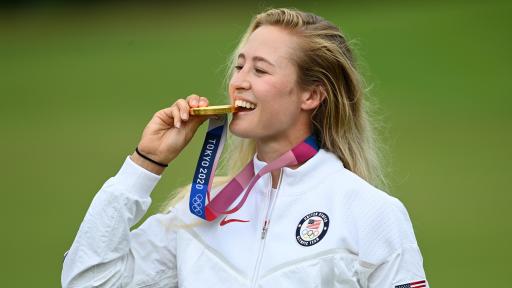 Nelly Korda has risen to superstardom in 2021 on the LPGA Tour and she has become a name that is not only likely to be at the top of the leaderboard each week, but one that people expect to be at the top.

She won the Gainbridge LPGA in February, the Meijer LPGA Classic for Simply Give in June and in the following week, she became World No.1 by winning the KPMG Women's PGA Championship.

If she hadn't already, Korda has now announced her success and image all over the world with an Olympic gold medal at the Kasumigaseki Country Club, winning by a shot from Lydia ko and Mone Inami.

It is so satisfying as a fan to see a golfer win four times in such a short period. This type of quickfire success is associated with so many of the game's greatest players such as Tiger Woods and Phil Mickelson.

But in a lot of other sports as well, a string of wins can make you the face and name to watch every week and Korda has now become this. If a racehorse gets a string of wins, or a tennis player wins consecutive grand slams, they endear themselves to the public.

The more that Korda wins and the more success that she experiences, she will grow a large fanbase that will cheer her on every week until she wins again.

Having only turned professional in 2017, her rise to the top of the world rankings makes for an incredible story too. The 23-year-old has six LPGA Tour wins and she appeared for America at the 2019 Solheim Cup.

I believe Korda is the face of women's golf right now because she is the one to beat and the one everyone will be comparing themselves to. How can the rest of the players match her standards? Clearly, this is what is required to enjoy such success on the LPGA Tour.

If Korda wins again this season, or even on many more occasions in 2021, there will be no doubt that she is the most prominent and highest-performing figure in the women's game.