Brooks Koepka showed up 45 minutes before his final round on Sunday and now we know why. 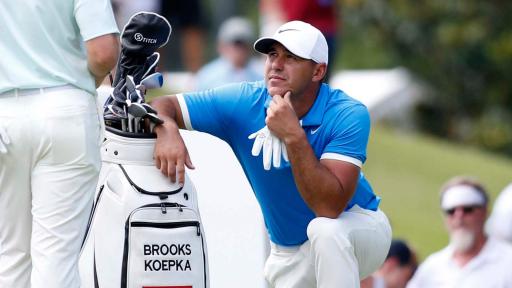 Brooks Koepka's late arrival for the final round of the WGC FedEx St. Jude Invitational seemed to stress everyone out, apart from Koepka. He was paired with Rory McIlroy as the two were set to battle it out on the final day in Memphis, but with less than an hour until their scheduled tee off time, Koepka was nowhere to be seen...

Koepka was just one shot behind McIlroy as the two were paired to play together in Memphis on Sunday, in an exciting pairing between two giants of golf, with eight majors between them.

Most players like to arrive early before their tee time, get onto the range and go through the paces with their coach and caddie. After that they'll practice their chipping and then after their putting, everyone is different and has their own style of warm up.

With just under an hour before the final tee time of the day, Brooks Koepka was nowhere to be seen, sending social media into a meltdown.

Of course once Koepka finally did arrive, 45 minutes before his tee time, he looked as calm and focused as ever. He then shot a five-under-par score of 65 to win the tournament, while McIlroy failed to take advantage of his lead on the final day and slipped down to T4.

Koepka's victory was his first WGC title and he took home a decent amount of cash too. Since his win on Sunday, Koepka has shed some light on why he turned up so close to his tee time.

“I always take less time on Sunday. I’m already loose when I get to the golf course - I don’t even need to hit balls,” he said. “I’ve already stretched, I’ve already done everything. I don’t know why everyone else is in a panic, I’m not. I mean everybody else is stressing. I’m sure you didn’t see one ounce of stress on my face. I’m usually out there maybe 55 minutes before a normal tee time, but on Sundays it’s always like 45.”

The four-time major champion had also been battling with illness throughout the week, but insisted it didn't affect his play.

“I don’t feel good, I haven’t felt good all week, but I don’t want to make an excuse.

“I have played for three straight days, it’s hot, I don’t feel that great, so I’m not going to go out there and waste my energy on the range when I could do it on the course."