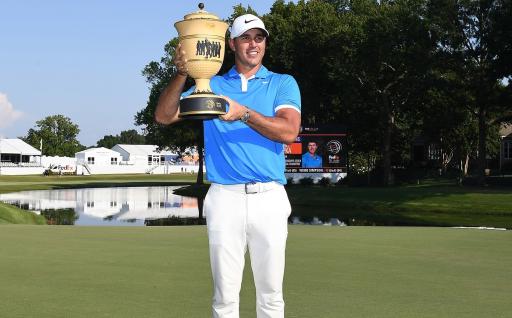 Brooks Koepka is an absolute machine when it comes to majors. He's won four majors in three years and this year alone has finished T2, 1st, 2nd, and T4 in golf's major championships. Koepka admitted that he only practices before majors, hence why his performances on Tour usually don't match his major form, but he looked as good as ever in Memphis last week, winning the WGC FedEx St. Jude Invitational.

Brooks Koepka cruised to a three-shot victory in Memphis on Sunday at the WGC FedEx St. Jude Invitational after Rory McIlroy once again failed to capitalise on being in the final group of a tournament.

Koepka shot an impressive five-under score of 65, while McIlroy couldn't find the form from his first three rounds, shooting a disappointing one-over 71, five shots behind Koepka, leaving the Northern Irishman in T4. McIlroy has now failed to break 70 in the final round of his 13 PGA Tour events this season.

Webb Simpson climbed the leaderboard after he shot six under par, the best score of the day, leaving him in second place, while Marc Leishman also finished ahead of McIlroy in third.

The win for Koepka is his first WGC title and makes him just the fifth player to win a major championship and a WGC title in the same season, joining Tiger Woods, Geoff Ogilvy, Rory McIlroy and Dustin Johnson in that elite group.

"It feels really good. I knew I had to make some putts and to catch up with Rory by nine would be big," Koepka said.

"I played really solid. The goal was to make no bogeys and I came out bogey free so I'm really pleased.

"To win this title against Rory was pretty special."

Brooks Koepka - What's in the bag?