President Donald Trump crashed a wedding at one of his golf resorts, clapped himself and then kissed the bride. 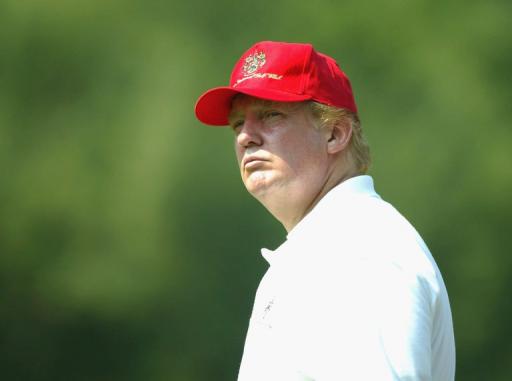 Donald Trump, the president of the USA, crashed a wedding at Trump National Golf Resort in Bedminster, New Jersey, while he was staying there for the weekend.

The president was spending the weekend at the Trump National Golf Resort and decided to make anappearance at the wedding reception of Nicole Marie and PJ Mongelli and got a very welcoming reception from the other guests.

Trump then stood in front of the crowd who were applauding his arrival and he then started clapping himself along with the guests.

He then asked the couple to come over to him and the couple, who are huge Trump fans, were thrilled to join the president.

The happy couple continued the "USA" chants under the embrace of Trump, who seemed very happy to receive such a reception.

Bride Nicole, who has publically shown her support for Trump on her personal Instagram account, then told the president "we love you so much" during the moment, where herself and Trump shared a quick kiss on her wedding day.

PJ, who had just married his fiance Nicole, also has a photo of himself and his new bride wearing a MAGA hat.

Danielle DeSantiss, cousin of the newly wed bride Nicole, filmed the meeting and posted footage on her Instagram account with the hashtag MagaWedding.

One woman who was enjoying the wedding said to Trump "you're a class act that you came in here," before another said "you've got all of our support here."

Trump was then asked by the groom if he would stay at the wedding for a while, with another guest adding: "please, please, it would mean so much to us."

A friend of the bride posted a picture of Trump's appearance at the wedding, posting the caption: "She’s one of the most #patriotic people you’ll ever meet maybe besides my sister. #weddingcrashers #presidenttrump."

<
Previous
Graeme McDowell 'proud of the town' after a 'phenomenal' Open
>
Next
Here's how much every golfer won at The Open...
Latest News
Golf news
NEW Glasgow golf facility to "revamp the sport" set for Summer 2023 launch
Golf news
Paige Spiranac takes on troll with selfie of 60-something mother
Equipment news
TaylorMade launch Hi-Toe 3 Wedges; focus on versatility and performance
Golf news
Is this the most DANGEROUS hole in the world of golf?
Equipment news
Fujikura extends VENTUS TR line of golf shafts for 2022
Latest Reviews
Wedges
The SECRET To Improving Your Short Game? PING ChipR Review
Drivers
Most UNDERRATED driver of 2022?! Honma TW757-S Driver Review
Footwear
Under Armour HOVR Drive 2 Golf Shoes | Best Golf Shoe review
Irons
TaylorMade Stealth UDI and Stealth DHY | Best Driving Irons 2022
Irons
I Did NOT Expect This! Cobra Forged Tec ONE LENGTH Review 2022
Equipment Reviews
Equipment
Peter Millar have an AMAZING selection of golf shorts!
Equipment
The BEST PUMA golf polo shirts as seen on the PGA Tour!
Equipment
The BEST Nike Golf shirts as seen at the PGA Championship
Equipment
NEW VICE Pro Drip Silver Hills Golf Balls: Limited Edition
Equipment
Golf Betting Tips: Our BEST BETS for Round One of PGA Championship
Latest Tips and Instruction
Tips and Instruction
Learn how to chip like a winner on the DP World Tour!
Best tips and instruction
What can we learn from Jordan Spieth's new pre-shot routine on the PGA Tour?
Tips and Instruction
How to NEVER MISS another short putt with Manolo Vega!
Tips and Instruction
Sergio Garcia tells Me and My Golf GREAT driver tip: "Pull the chain!"
Tips and Instruction
Top golf coach Manolo Vega teaches you how to ATTACK pin from 50 yards