Dustin Johnson opens up five-stroke lead at The Northern Trust 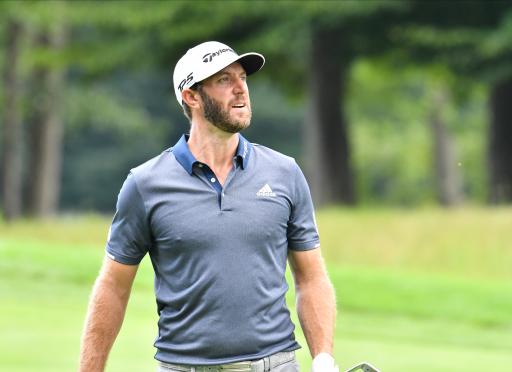 Dustin Johnson will take a five-stroke lead into the final round of The Northern Trust following a superb 7-under 64 on day three at TPC Boston.

Johnson, who posted a sublime 11-under 60 on Friday, drained an incredible 40-foot putt for eagle on the final hole to reach 22-under par.

An eagle to finish it off. @DJohnsonPGA takes a commanding 5-shot lead heading into Sunday @TheNTGolf.#QuickHits pic.twitter.com/b9MOpJJd8a

The big-hitting American poured in four birdies on the front nine to go out in 32 strokes. He made another birdie when firing a long iron into two feet for birdie at the 12th but then handed it back with a bogey at 13.

Johnson stretched clear of the chasing pack, however, when rolling home a 20-footer for birdie at 17 followed by his stunning eagle at 18.

The 21-time PGA Tour winner is currently projected to move to No.1 in the FedEx Cup standings should he go on to win the tournament on Sunday, and victory would also move him back to No.1 in the world rankings.

Johnson has spent 91 weeks in total as the World No.1 during his career.

In-form American duo Harris English and Scottie Scheffler find themselves in a tie for second and five strokes adrift of Johnson.

Louis Oosthuizen lies seven strokes off the pace in fourth, with Harry Higgs, Daniel Berger and Danny Lee a further stroke back in tied fifth.

RELATED: DUSTIN NOT INTERSTED IN WHAT KOEPKA HAS TO SAY ABOUT HIM

Johnson held the 54-hole lead in his last tournament at the PGA Championship but went on to finish in a tie for second.

The former World No.1 has endured a rollercoaster ride of performances since golf's return in May with victory at the Travelers Championship followed by a pair of 80s at Muirfield Village and a withdrawal at the 3M Open through a back injury.