Golfer gets attacked by a SWAN while he's on the putting green!

Well something ruffled his feathers... 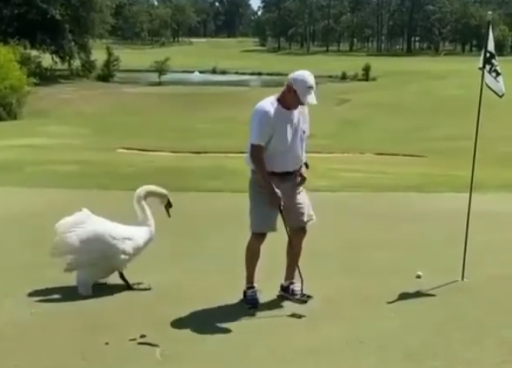 A video has gone viral this week of a golfer being attacked by a swan while putting out on the green.

To the golfer's credit, he holes out his clutch six-footer with the swan watching on from behind, but as soon as the ball drops, the swan pounces, attacks and proceeds to chase him around the green.

Here's a look at what a number of golf fans are saying about the incident:

"He was dialed in mentally to make the putt though."

"Unreal putt given the circumstances to be fair."

"Serves him right for wearing a T-shirt to the golf course."

"Imagine the scenes if this happened on the PGA Tour... I'd love to see Patrick Reed being chased around the 18th green by a swan!"

"That is what you deserve for not wearing a proper golf shirt."

"I'd be crying if this happened to my mates."

"That putter is getting wrapped straight round its head."

"Surprised he didn't use the club."

"I would deal with this every time if I could hole putts each time."

"At least the swan waited for him to putt out first."

"That swan is absolutely fuming."

NEXT PAGE: BROOKS KOEPKA AND BRYSON DECHAMBEAU IN STREET ARGUMENT!