This golfer's ball went down a hole in the fairway so he and his group decided to make an even bigger one in an attempt to find it. 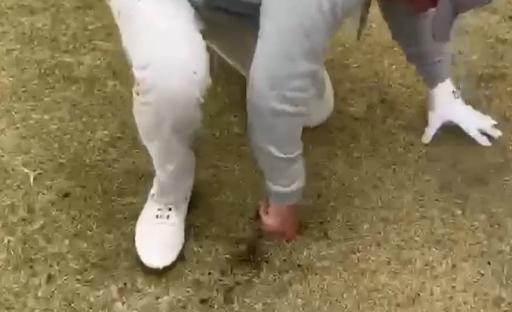 Now if your golf ball is embedded in the ground, you get a free drop, but if it's lost down an animal hole on the middle of the fairway, making even bigger holes just to find it is a pretty stupid idea.

In a video posted on the Golfersdoingthings Instagram page, this golfer explains to the camera that he's hit a great shot on a par-5 and has a nice yardage to the green, but his ball happens to have fallen down some kind of hole in the ground.

It's clearly not a tournament where a rules official is going to come along and speak to the player, so the bright thing to do would be get another ball out of his bag and drop it by the hole and if his friends are kind enough they'll give him the free drop.

Instead, one guy in the group decides to use the head of his golf club and smash it into the ground to make an even bigger hole, in an attempt to find the lost ball.

Watch the video below and see the incident for yourself:

"Absolutely shredding a section of the fairway for a ball. Kinda makes me feel like he deserves to lose an infinite amount of balls," said one golf fan in the comments.

"I don’t even know where to begin - the dude’s pants or the club being used as a mattock. Jesus."

NEXT PAGE: Golf fans inspired by European Tour video of golfer playing with one leg