"He has this swagger": Paige Spiranac reveals her pick to win 2022 Masters

Paige Spiranac made her prediction for the 86th Masters on her latest episode of her podcast. 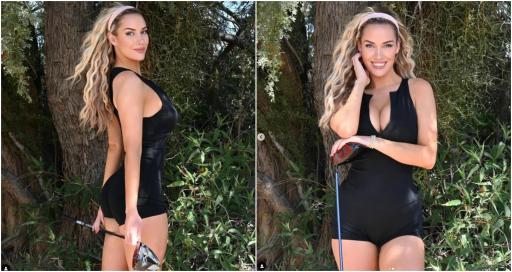 Paige Spiranac says she is picking Cameron Smith to win The Masters and claims there would be nothing better than watching him have the green jacket placed on his shoulders as he rocks his "p--n stache and mullet".

Australian Smith picked up his second win of the season at The Players after giving golf fans a white-knuckle finish at TPC Sawgrass which included a ballsy shot on the famed 17th par-3 and an up-and-down at 18 for the ages after he put his second shot into the water.

Spiranac said on her latest podcast that she did in fact pick Keegan Bradley for the win at the unofficial fifth major. But the big American's faulter at the last hurdle cost himself and Spiranac some cash.

Now social media sensation Spiranac believes that Smith will in fact win The Masters. She told her co-host Amanda Rose that she is "all in on Cam Smith" and has been for a while, describing him as the new face of the game.

Spiranac said of Smith: "The kahunas on him! Are you serious?! That shot [on 17] was the shot of the tournament."

She added: "Also, this points out how annoying golf Twitter is. Everyone who plays golf knows for a fact that Cam Smith was not going right of the pin on 17.

"He clearly pushed it. Regardless, though, I don't think he pushed it that much. So he was... firing pretty close to that pin which was a ballsy shot to begin with."

"Cam Smith is a player. I think he is going to win The Masters this year."

Adam Scott was the first and remains the only Australian to win the green jacket. Greg Norman came close too but memorably had a nightmare final round in 1996.

Scott won the 77th edition of the event on a rainy Sunday in a sudden death playoff over Argentine Angel Cabrera.

More: Cameron Smith has "no interest" in Saudi golf league

"You know what - so I like confidence - so a guy who is confident is really attractive to me.

"And so, if I saw Cam Smith I think we can all agree that he isn't the most conventionally attractive man out there.

"But he has this, like, swagger to him. He seems really nice. He's funny...and it's like he can pull off the mullet and the mustache.

"He has this look and he has this confidence and I'm like... okay... you can rock that. I like that."

She continued: "There will be nothing better than him going to The Masters, winning and having a green jacket put on him with his p--n stache and his mullet.

"I think that that would just be the most amazing thing ever. I am all in on Cam Smith and I have been for a while.

"Every time I've picked him he always seems to cash out so...hey... Cam Smith [is] the new face of the game.

"Get Goldman out of here, it's Cam Smith!"