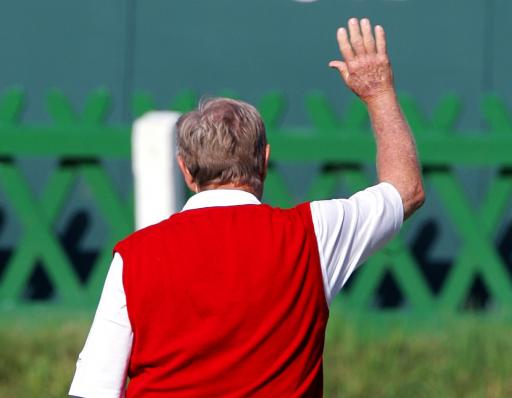 Jack Nicklaus joked he should now have 19 major victories against his name after watching himself lift the Claret Jug on the Old Course at St Andrews in a very clever 'Open For The Ages' broadcast on Sunday.

Nicklaus, who was watching the action unfold on television while hosting his annual Memorial Tournament at Muirfield Village, prevailed by one stroke over Tiger Woods on 16-under par.

Did I just win a 19th major without leaving my couch? Seriously, thanks to the @therandagolf, @theopen and @golfchannel for a creative and fun way to relive decades of The Open Championship. Ending wasn’t bad either!

"Did I just win a 19th major without leaving my couch?" joked Nicklaus on his Instagram page.

"Seriously, thanks to the R&A, The Open and Golf Channel for a creative and fun way to relive decades of The Open Championship. Ending wasn't bad either!"

The 18-time major record holder Nicklaus finished one stroke clear of 15-time major champion Woods on 16-under par, with Seve Ballesteros back in third on 14-under par.

Tom Watson and Sir Nick Faldo finished a further stroke back on 13-under par, with Rory McIlroy and Louis Oosthuizen on 12-under par.

Jordan Spieth finished 11-under par, with John Daly on 10-under par, and Ernie Els rounded out the top 10 on 9-under par.

The winner of 'The Open For The Ages' was determined by a fan vote, which registered more than 10,000 responses, and a data model developed in partnership with NTT DATA that utilises this fan vote along with player career statistics and historical data from The Open to calculate the Champion.

Nicklaus, 80, revealed last week that he and his wife Barbara both tested positive for coronavirus in March, but have both made a full recovery.

Previous
How much every player won at the Memorial Tournament
Next
Jon Rahm: What's in the bag 2020