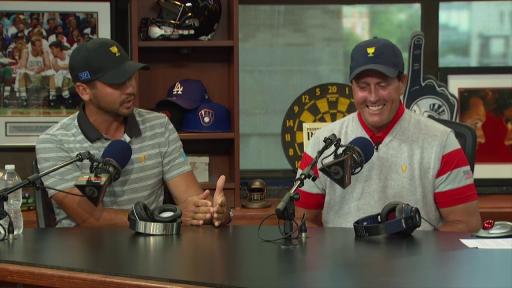 Jason Day believes the USGA should have disqualified Phil Mickelson from last week's US Open instead of penalise him two strokes for hitting a moving ball on the green.

Day, who missed the cut at the US Open last weekend, said: "It's obviously disappointing to see what Phil did. I think a lot of people have mixed reviews about what he did."

The USGA revealed how they slapped Mickelson with two strokes for his head-turning decision to hit a moving ball on the 13th green, preventing his ball going down a slope and off the green, under Rule 14-5 - thus turning the American's score of 8 to 10.

RELATED: MICKELSON - "I WAS WILLING TO WITHDRAW FROM US OPEN"

However, a number of people believe Mickelson's actions better fit Rule 1-2 or Rule 33-7, resulting in disqualification for a "serious breach" of the rules. Seemingly made worse when the five-time major champion revealed after his round that he had "thought about doing this for some time."

Day added: "It’s just unfortunate that it happened at the USGA’s tournament, where they enforce the rules, like the R&A. And I think they may have, they probably should have enforced a different outcome for Phil.

"But it is what it is. It’s done. It’s just disappointing that that is overshadowing the winner of the whole week. I think if they had it back again, they may have chosen a different outcome."

NEXT PAGE: THE PHIL MICKELSON / HAPPY GILMORE REMAKE OF HIS MOVING BALL INCIDENT IS ALL YOU NEED TO SEE TODAY!