Jordan Spieth: I laughed at Phil Mickelson incident, it was funny

Spieth sees strategy in Mickelson's play at US Open. 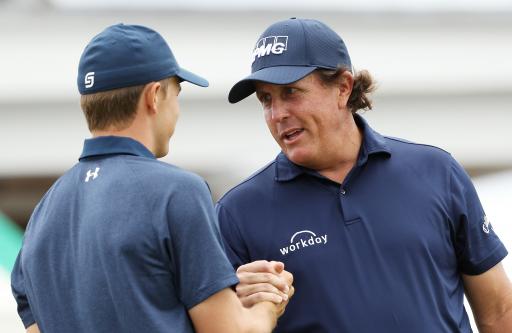 Jordan Spieth has leapt to the defence of Phil Mickelson by claiming he saw strategy in his compatriot's play to putt a moving ball on the 13th green during the third round of the US Open last week.

In fact, Spieth stifled a chuckle too.

"I laughed, I thought it was really funny," said Spieth, addressing the media ahead of his title defence at this week's Travelers Championship.

"Phil knows the rules. There was a chance it was going to go back behind the bunker and he's got to chip back, or he was going to play off the green anyways, so he was potentially saving himself a shot.

"So if that was the intent, then what's the harm in that? He's playing the best score he can.

"I don't think people thought that was the intent, but I'll take his word it was his intent. He knows the rules."

WATCH: THE HAPPY GILMORE REMAKE OF THE PHIL MICKELSON INCIDENT