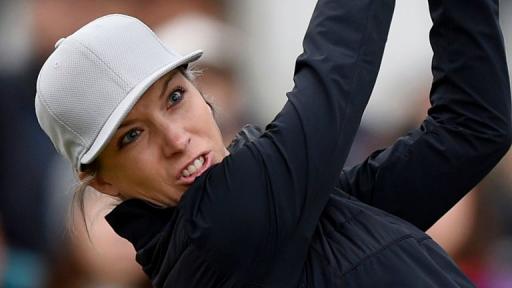 Reid's comments come after she tweeted criticism of TaylorMade's Driving Relief skins game on Sunday night - between Rory McIlroy and Dustin Johnson against Rickie Fowler and Matt Wolff - for not including women golfers.

Is golf really back? pic.twitter.com/HAM3Jops9G

So glad all 200 of your followers saw this, let me help your reach. https://t.co/lc4ixy2xMA

"What an opportunity golf has let slip, once again, to represent equality," read a sentence in Reid's note that she posted on Twitter during the skins game that raised more than $5.5 million for coronavirus relief efforts, and was the most viewed programme on Sky Sports since the UK lockdown began.

As a result of her stance on the skins game, Reid claimed she has received a number of "disgusting" comments this week and that her words were taken "completely out of context."

"Of course I felt the charity was great, the four guys are awesome guys," Reid told Telegraph Sport.

"All I was saying was it would have been pretty cool if you would have got a couple of the girls involved [to] really bring golf back to TV, and I think it was an opportunity missed.

"Golf just doesn’t get it. They do Soccer Aid where they bring in Kelly Smith, I think that’s awesome, that’s how it should be. I couldn’t believe the comments I was getting. It was disgusting, people took [what I said] completely out of context.

"A couple of male pros — guys that I've been friends with since I was 12-years-old — said, 'Of course the women have to pipe up [about] a charity event'. I'm sorry, but just because it was a charity event, it's not going to take away my opinion. I still think women should have been involved. I was really disappointed."

Reid added: "Me being here in America, I think that I've just seen what, for example, Kobe Bryant was doing for women's basketball. The NBA players voluntarily choose to go with their families to WNBA games, wearing WNBA gear which is just so powerful, because it is a male-dominated world.

"Very rarely do we see any guys at our tournaments, or tweeting about it, or talking about it, and we always talk about the guys, because we love golf and we're huge fans of the guys. But there's just no talk about us.

"It would help us, for a respect point of view, if the boys just started to talk about us a little bit. If we just had a voice, like Andy Murray does for tennis."