Mike Lorenzo-Vera has a three-shot lead at the DP World Tour Championship. 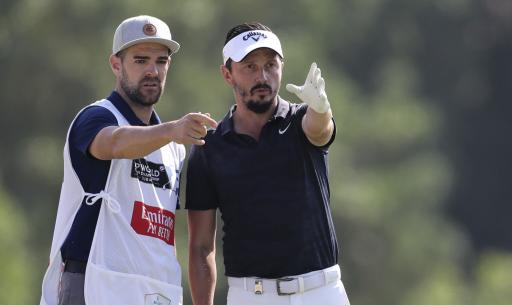 Mike Lorenzo-Vera equalled the lowest 36 hole score of 12 under par at the DP World Tour Championship on Friday, but missed a putt at the last to set a new record.

The Frenchman, who is still looking for his maiden win on the European Tour, put together another dazzling performance, despite battling a lung infection.

After missing the fairway at the last, Lorenzo-Vera faced a testing two-putt for par, but his weak first effort left a tricky save, in which he went on to miss, opening the door for the chasing pack.

Tommy Fleetwood put together a fantastic four-under par round of 68, to give him a share of second place with Jon Rahm. As things stand, the Englishman would top the Race to Dubai rankings, with Bernd Wiesberger only managing to shoot one-under in a round he described as 'flat', but there's still plenty of time for the rankings to change before close of play Sunday.

Rahm's round looked pretty lacklustre and the putter looked a little cold, but the 25-year-old pulled it back towards the end of his round to shoot three-under par and just as many shots behind the leader. Reflecting on his round, Rahm was pleased with the way he bounced back after a slow start.

"It did not look good," said Rahm. "You know, the only reason why I wasn't in a better position was because my putter just felt odd all day. I missed quite a few short putts early on, on the first hole and seven and that little mishap on eight, but I was still feeling good.

"Adam (his caddie) and I were great you know we were walking down nine and he was like 'you know what, let's just try and get to even par before we get to 14 and then 14 through 18 there's some birdie holes so we can try and finish under par and that was the mission.

"I made a great birdie on 9 and kept trying and made a lot of good putts and then when I made that birdie on 14 to get to even, it kind of felt like mission accomplished, I relaxed on the last few holes and even though I had a little miss on 15 I still got to finish pretty strong."

Rahm indeed finished strong, after finding the fairway with his driver on the par-5 18th, the Spaniard hit a monsterous 5 wood onto the green and made no mistake over the putt, making an eagle to put him just three off the lead heading into the weekend.

"I was just jealous of Rory yesterday," joked Rahm. "I had to try and copy that. It was 236 metres (258 yards) to the pin and the wind into from the right, so it had to be a perfect 5 wood to get it all the way there and any kind of miss could have potentially gone in the water. I decided to be brave on that one and made sure I hit about a hard a 5 wood as I can hit and I could not have hit a better shot there.

"I'm so proud of turning it around when I did because things did not look good."

Rory McIlroy, who after round one was in second place, failed to put the pressure on his playing partner Lorenzo-Vera and made too many mistakes, finishing his second round two-over par, dropping him into T5 at six under par.