Jack Nicklaus: Our final round was really good, but theirs was even better. 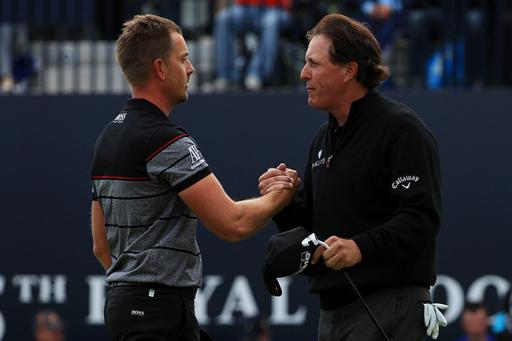 There have been many epic head-to-head battles down the years to win majors, but few come close to Sunday's "Duel in the 'Toon' of Troon" between eventual Open champion Henrik Stenson and runner-up Phil Mickelson.

Scuffling and tussling like Ali and Frazier in the ring, exchanging punches in the final round for 14 birdies and an eagle between them in a race for the famous Claret Jug, it was Stenson who landed the knockout blows with three consecutive birdies from the 14th.

Stenson would go on to birdie the final hole to bring the house down and sign off by equalling Jason Day's record major total (2015 US PGA) at 20-under par. Five-time major champion Mickelson, who beat Stenson to win the Open at Muirfield in 2013, had to settle for second despite a flawless 65.

Letting the dust settle on a memorable Open, Jack Nicklaus admits his "Duel in the Sun" with Tom Watson at Turnberry in 1977, below, has now been put somewhat in the shade.

"I was fortunate to watch every second of the final round of The Open Championship and I thought it was fantastic," the 18-time major champion wrote on Twitter.

"Some in the media have already tried to compare this final round to 1977 at Turnberry, with Tom Watson and me in what they called the Duel in the Sun.

"I thought we played great and had a wonderful match. On that day, Tom got me, 65-66. Our final round was really good, but theirs was even better.

"Henrik knew Phil wasn't going to lay down and just let him do it and it will go down as one of the finest finishes of all time."

The 40-year-old Swede also eclipsed Tiger Woods' 19-under par record total at the 2000 Open and entered the record books for firing the lowest final round by a major champion, beating two-time Open champion Greg Norman's 64 at Royal St George's in 1993.

Throw in the difficulty of Royal Troon, blustery winds and tucked away pin positions, and this will likely go down as one of the most impressive final-round performances the game has ever seen.

Henrik Stenson
phil mickelson
Jack Nicklaus
Duel in the Sun
duel in the toon of troon
Previous
ECCO unveils Cage Evo shoe
Next
Daniel Brooks: A great week on Tour is around the corner