Charles Barkley's new golf swing has taken a lot of people by surprise, one of which is Paige Spiranac... 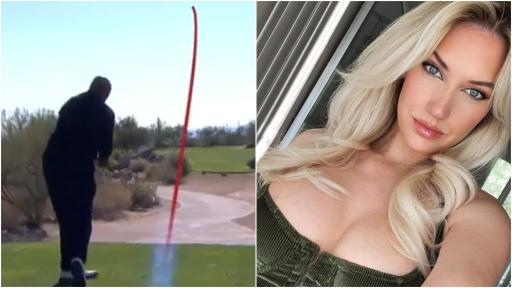 Tiger Woods and others may have ridiculed Charles Barkley ahead of The Match 3 on Friday night, but the former NBA star certainly had the last laugh as he showed off a remarkably improved swing that took many people by surprise - and one of which was social media sensation Paige Spiranac.

Barkley - who teamed up with five-time major champion Phil Mickelson to defeat two-time Super Bowl winner Peyton Manning and three-time NBA champion and scratch player Stephen Curry by a scoreline of 4&3 - hit some indifferent shots at Stone Canyon GC in Arizona, but on the whole his game was in a much better place than where most golf fans have seen it before.

"The most surprising turn of events in 2020 is that Charles Barkley's golf swing looks good," tweeted Spiranc during the live coverage on Friday evening.

To the shock of many, Barkley sent his opening two shots down the middle of the fairway, before hitting a low bullet down the third.

While there were still plenty of shanks and short missed putts on display during the round, Barkley's game looked in much better shape.

Here's a before look at Barkley's swing:

And here's a look at Barkley's new swing:

Not the Charles Barkley swing we remember ... pic.twitter.com/z2LXYukrYf

The first edition of The Match was played in 2018 at Shadow Creek in Las Vegas, where Mickelson beat Tiger Woods in a winner-take-all $9 million showdown.