Paige Spiranac: "DO NOT call it British Open because golf people will get mad!" 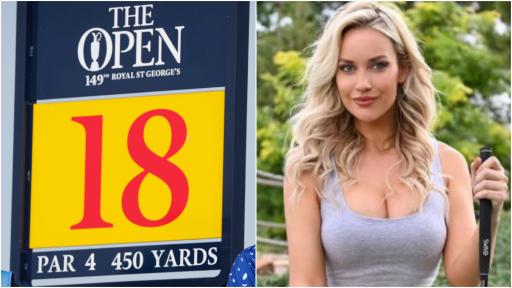 Paige Spiranac has tweeted her followers to not call this week's famous Open Championship as the British Open "or else golf people will get mad because they hate everything."

The Open Championship, yes that's correct, is the oldest golf tournament in the world having first been staged at Prestwick in 1860. In total, there have been 148 editions of the tournament.

A number of American professionals on the PGA Tour such as Tiger Woods and Phil Mickelson have labelled the tournament as the 'British Open' in the past.

Typically, you hear many American commentators refer to the major as the 'British' or 'British Open', too.

It is, however, known as 'The Open Championship', which is why Spiranac wanted everyone to remember that ahead of golf's final major of the season at Royal St George's this week.

The Open week! Here’s your reminder to not call it the British or the British Open or else golf people will get mad because they hate everything

It's fair to say Spiranac's tweet has got plenty of golf fans talking today on social media.

Check out some of the comments below:

"It annoys us when individuals are too abhorrent to get the name correct. It is simply 'The Open' called so because it is the oldest golf tournament in the world... period. Now enjoy golf in its purest form at Royal St George's this week."

"I swear it used to be called the British Open when I was a kid. I know recently has been the open. Is my memory wrong or when did the change happen?"

"If it's not the British Open, why do they only play it in Great Britain?"

"It was and guys like Phil and Tiger still call it the British. Folks at The Open can f*** right off getting mad about that. It's still the British Open."

"It is The Open Championship, always has been and always will be. Calling it the British is just one example of American terms to downplay the importance of something that is not "theirs" or upgrade something that is "theirs". Like NBA and MLB champs being called "World Champs".

"Why arrogant, it’s been called the Open Championship for 150 years. I suppose the main reason why British Open is kinda not right is that it literally sometimes does not take place in Britain... Portrush is not in Britain. It is however in the UK. UK Open… no."

What do you call this week's tournament? The Open Championship, the British or the British Open? Share your thoughts over on our social media channels, or come and join us over on YouTube.