Paige Spiranac mocks the Dallas Cowboys on Twitter, taking aim at a crying fan and the money spent on running back Ezekiel Elliott. 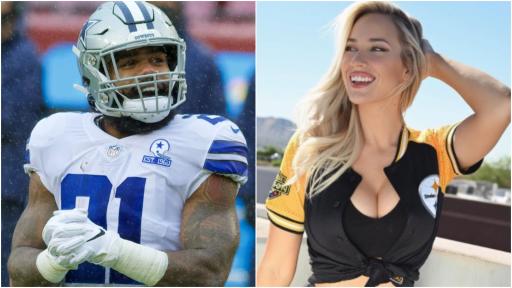 Paige Spiranac has fired shots at the Dallas Cowboys on Twitter, taking aim at a video of a crying fan during the side's 23-17 defeat at home to the San Francisco 49ers on Sunday night.

Commenting on a video of a distraught Cowboys fan, Spiranac mocked them for splashing out on a $90 million deal to sign Ezekiel Elliott back in 2019.

The Cowboys lost their home match to the 49ers on Sunday night meaning they are eliminated from the NFL Playoffs as their long wait for Super Bowl glory stretches into a 26th year having last won it back in 1996.

Taking aim at a video of a crying man with four minutes of the game remaining, Spiranac controversially said the Cowboys now "don't have enough money to pay the refs" in order to change the outcome of the game.

Spiranac has 3.2 million followers on Instagram, which is more than any other individual golfer on the planet, including Tiger Woods.

RELATED: HOW MUCH IS PAIGE SPIRANAC REALLY WORTH?

When your running back is so expensive, you don’t have enough money to pay the refs pic.twitter.com/yKOZ91o0Wy

"When your running back is so expensive, you don’t have enough money to pay the refs," tweeted Spiranac.

RELATED: PAIGE SPIRANAC SAYS GUYS HAVE BEEN USING HER JUST FOR GOLF LESSONS

Spiranac is said to be a Pittsburgh Steelers fan as her parents were from Pittsburgh.

Unfortunately for Paige, the Steelers went down 42-21 to the Kansas City Chiefs later in the evening.

But she also claims to have a soft spot for the Buffalo Bills, so she will no doubt be happy after seeing them take out the New England Patriots convincingly 47-17 on Saturday night.

NFL fans and followers of Spiranac were quick to comment on her latest post about the Cowboys.

Check out some of their responses below, it's fair to say NFL fans were divided:

Actually they're paying a MEDIOCRE QB 40 million a year..he was 23-43. Hardly spectacular

I didn't get my newspaper this morning. How did the steelers do?

Zeke got the money and has tanked it ever since

That woman broke my heart

NEXT PAGE: PAIGE SPIRANAC ON WHAT MAKES HER HATE GOLF THE MOST