Paige Spiranac with an hilarious self-own over shirtless Fitzpatrick clip 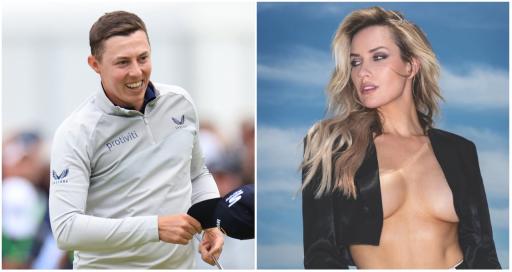 Paige Spiranac jokingly accused U.S. Open champion Matthew Fitzpatrick of oversexualising the game after the Englishman posted a video practising without his shirt on.

We’re not exactly sure why Fitzpatrick decided to go topless here but he posted a video of one of his most recent training sessions where he absolutely sends one into a net in front of him.

Listen to that sound as he makes connection. Look at the left heel coming up off the ground. Fitzy has definitely made some gains with his speed and power over these last few years.

Fitzpatrick is widely regarded as one of the hardest-working players in the game. The 2013 U.S. Amateur champion reportedly takes a note of every single shot he hits in competition.

This allows him to get more insight into his data and make gradual improvements. He also decided to switch up his chipping action, going left-hand-low to allow for a more consistent strike.

Such is the improvement of Fitzpatrick, the Englishman even impressed LIV Golf player and former World No.1 Dustin Johnson when he sent one of his drives sailing past the American’s golf ball.

Still, Spiranac jumped on the back of this post by Fitzpatrick, joking: “Is he a model or a golfer? Stop over sexualizing the beautiful game of golf.” Well played, Paige.

Is he a model or a golfer? Stop over sexualizing the beautiful game of golf https://t.co/DBl6QMkNus

Spiranac recently spoke about the LIV Golf developments on the bunkered.co.uk podcast, where she revealed she would not work with the Saudi-backed series for any amount of money.

She blasted Mickelson after he blocked her on social media. Lefty reportedly told her this was a mistake, or a “glitch” on Instagram, before blocking her again.

Spiranac said of this: “She continued: “I am anti-Phil now because that’s just pig-s—t. “Now I just say whatever about Phil because I think he’s a little – I can already see the headlines now, “Paige says Phil’s fake” - but I think he is.

"He just projects a certain way in his interviews and then he’s like thumbs-upping the fans. I don’t know, if he cared so much about the fans and what he’s doing, why jump ship?

“I’ve been gaslit and I’ve been ghosted but I have no idea what that was. It was the weirdest thing. I mean, just keep me blocked then. I don’t care.

“But like I say, I have never said anything bad about Phil... until now. Because if you block me, I’m coming for you.”