Paige Spiranac posted her latest golf swing in an apparent joke to the people who criticise her game. 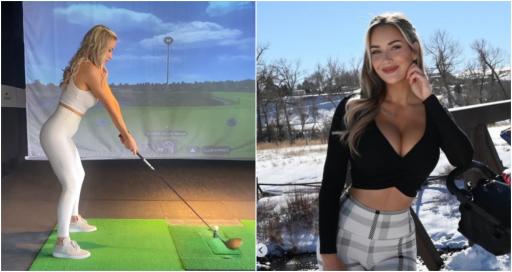 The ugly nature of the Internet and her commanding presence on social media means she gets her fair share of attention.

Of course, by now, Spiranac is somewhat a pro with batting away the critics, naysayers and trolls with some utterly hilarious responses.

None more so than her take on Harry Higgs when her ripped off his shirt at the WM Phoenix Open a few weeks ago at TPC Scottsdale.

Spiranac's response to Higgs "sexualising" himself when over the top of the heads of some trolls who fired back towards her.

At present, she has 3.2 million followers on Instagram. She posted another self-deprecating joke this week which showed her golf swing.

It seemed to be somewhat of a jibe towards those who don't believe she is very good at golf.

"How people think I play," she posts with a rather interesting swing. Then she follows it up by piping one 281 yards down the fairway.

"People think I don’t show my shots from the back view because I suck but really it's because I have no ass and a shitty take away," she writes.

Elsewhere, in her latest podcast with new co-host Amanda Rose, they discuss the fallout from the Phil Mickelson controversy.

Spiranac took aim at Greg Norman over the developments, saying he was "sleeping with the fishies" and "he is not doing well".

Related: Paige Spiranac jokes "it's hard with these jugs"