Paige Spiranac: "It's fun to give Bryson DeChambeau s*** at times!"

Spiranac congratulates DeChambeau despite still wanting to give him some stick... 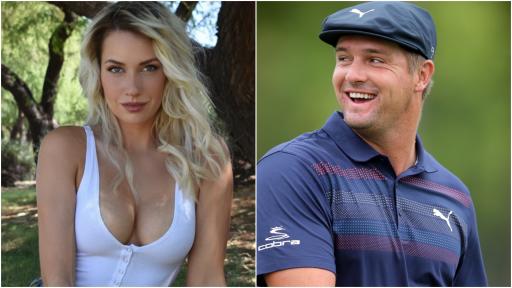 Paige Spiranac has congratulated Bryson DeChambeau on his maiden major triumph at the US Open but admits it's still "fun to give him s*** at times."

Spiranac, who has amassed just shy of 3 million Instagram followers, has been particularly vocal about DeChambeau's bad behaviour on the PGA Tour, particularly when he argued with a rules official at the Memorial Tournament.

It’s fun to give Bryson shit at times but you have to give him so much credit for sticking to his guns despite all the hate and now he gets to call himself a US Open Champion. Well deserved win.

"It’s fun to give Bryson s*** at times but you have to give him so much credit for sticking to his guns despite all the hate and now he gets to call himself a US Open Champion," tweeted Spiranac following DeChambeau's emphatic six-stroke win at Winged Foot on Sunday.

Back in July, the social media sensation slammed DeChambeau for questioning his out of bounds decision with a rules official at Muirfield Village.

At the time, Spiranac said: "The way he acted to that rules official was so uncalled for and I think it just shows where his head space is at right now, where he thinks that he is literally pioneering the way that golf is being played.

"And so he is so far and beyond everyone else that he can tell a rules official, who their job is to know the rules inside and out.

"And for Bryson to say, ‘I don’t believe you, I need a second ruling.’ Who do you think you are?”

Watching golf always makes me want to get out and play! I’ve been working on trying to increase my swing speed What are you guys up to this weekend?

NEW episode of @playingaroundpodcast is out with @kayce_smith I want to thank you all again for subscribing and listening! Comment down below future topics you want me to talk about or tag guests you’d love me to have on the pod!

One of the most useful shots you will ever learn! Knowing how to hit a bump and run will save you so many shots on your rounds. Once you get the technique down, it’s all about club selection so practice, practice, practice! Let me know if you have any questions

The most highly requested shot, the flop shot! This is my favorite shot to hit in golf and is actually pretty easy once you get the hang of it!

PGA Championship and chill But oh my gosh what an insane tournament! NEW @playingaroundpodcast recap episode is out! Thanks for all the questions