Popular social media golfer Paige Spiranac had a tough time with her American football selections last week and she addressed this on her social media pages. 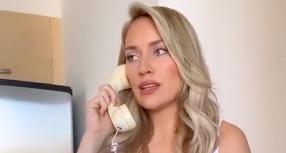 Paige Spiranac is not only passionate about golf but she also holds a keen interest in other sports such as American football.

She currently works as an ambassador for PointsBet Sportsbook which is a popular bookmaker that deals in the United States.

However, Spiranac made a video which she posted on Twitter that addressed her bad betting selections during recent weeks of the American football season.

In the video, she jokes about her professional golf career and how she has now pursued a career on social media. She questioned why people listen to her betting selections when "she couldn't even break 80" in a tour event.

Roasting myself after a bad week of picks. Enjoy. pic.twitter.com/SvSEDANPdu

Spiranac also joked that she uses too much bleach in her hair and said that so much bleach had "seeped into her brain that she can't even see straight."

At the start of the video, the 28-year-old begins by pretending to be on the phone to PointsBet, apologising for her wrong betting selections.

It is these entertaining videos and content like this which have led to Spiranac becoming such a popular figure in both the golf world and the social media industry.

I think it is fair to say that Spiranac finds it easy to brush off the criticism she may receive for occasionally choosing bets that lose. This is an event many of us can relate to I'm sure.