Paige Spiranac poked fun at herself again with her latest Instagram post but how many people will miss the memo again? 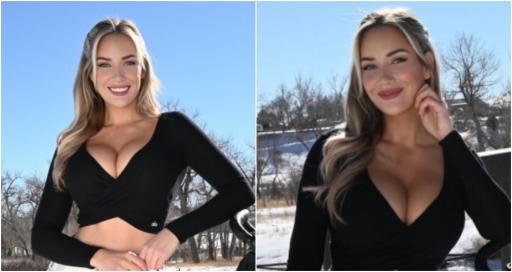 A few weeks ago she made a hilarious joke about tour pro Harry Higgs when he tore off his shirt at the WM Phoenix Open.

Higgs, 30, is now facing a possible fine from the PGA Tour after revving up the slightly intoxicated crowd at TPC Scottsdale.

Spiranac suggested that Higgs had "mommy issues for sure" despite a barrage of comments from folks who had clearly missed the joke.

"I can't believe Higgs would over sexualize himself for attention. I would NEVER," she wrote to her 500,000 followers on Twitter.

"What a horrible role model for young boys to look up to," Spiranac, 28, added. Still, the joke didn't land with some people.

More: Paige Spiranac thinks this is a major distraction

As is the horrible nature of social media and having more Instagram followers than Tiger Woods, she often finds herself on the end of abuse.

In 2020, Spiranac explained how a leaked photograph of her from an ex led to an intense period of anxiety and stress.

The Sun reported that one fan approached her with an enlarged copy of the photograph asking for an autograph.

Children were reportedly present among other attendees. It reduced her to tears, she later said.

In a recent episode of Golf Digest's Be Right podcast, she opened up on her social media revolution.

More: How much was Paige Spiranac worth in 2021?

She told them about her experience with cyber bullying:

"It was really hard, because when people would come at me, it was about my golf game.

"As we all know, your ego is so tied in to how you play, and publicly for people to be like 'You suck, you need to quit,' that was really hard for me and I took it very personally.

"My early interviews I talked a lot about cyberbullying, and I was kind of dealing with other things behind the scenes, so I was a big advocate for that.

"Things have progressed where I've stopped playing professionally and now social media has become my career. It was hard because now I want to have a 'hot take,' but sometimes it comes at the expense of someone else, and not in a way that's bullying.

"Now I'm tweeting stuff about players, and it's funny, but I would get so upset about that before [if it were me], but it's not really bullying. I was just soft. I was a huge baby. You do have to have a good sense of humor, you have to be able to laugh things off."

Now she is doing things on her own terms. The joke will probably go over the head of some people: