Paige Spiranac reveals five of her most "shocking" experiences when playing golf at country clubs down the years. 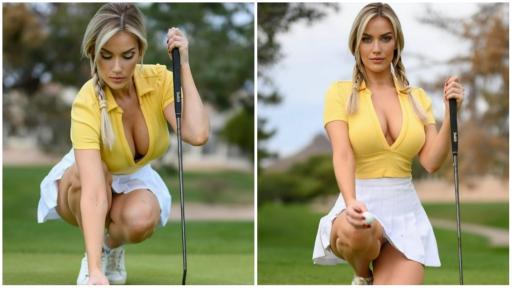 Paige Spiranac has taken to her Instagram Story to reveal five of her most shocking experiences when playing golf at country clubs.

The worst of them, which left Spiranac in tears, involved her being "berated" by an older female golfer over the length of her skirt.

Spiranac, who recently showed off her favourite outfits to wear when she plays the sport, explained she has encountered so many incidents when she has been playing golf at country clubs that she could do a full podcast episode on all of them.

But on Instagram, where Paige has just shy of 4 million followers, she lied on her couch to reveal five particular events that she labels as "shocking".

Earlier in the day, Spiranac filmed another viral video in her bedroom.

Related: Paige - "At least delete your DM before asking me out first"

Topics range from Paige Spiranac being stopped by a starter and not being allowed to play from the tips to being berated for her choice of clothing on the course.

"So in my post yesterday, I had a little comment saying you guys would be shocked by the things that have happened to me at country clubs," said Spiranac via her Instagram Story.

"I've had so many messages from people saying 'okay so tell us...'

"So I'll tell you some of my favourites. There are so many so I'll maybe do a full podcast episode on this. But it's just shocking that this happened.

"The next one, this guy was three holes ahead of me. I was a junior golfer at the time but I knew what I was doing. I knew how to take care of the course. I had my Mum there with me, and he drove three holes back, like three fairways over just to grab the sand out of my cart, and he forcefully put it in my hand and grabbed my hand to show me how to fill a divot. I always filled a divot, and if I didn't then my Mum would always do it. I always had sand out there with me, he was just waiting for me to do something wrong as a junior golfer. It was mortifying!

"This one happened last summer where I was invited out as a guest. I was dressed totally appropriately, and this older female member berated me in the parking lot that my skirt was too short and it was inappropriate. Nobody had a problem with it. She went out of her way, twice, to yell at me for it. I cried the entire way home.

"This is the last one I'll share, this one is just funny. I played at this really nice country club, and they had a strict dress code and I understand, It was maybe 40 degrees. I had a turtleneck, sweater and a jacket, and they pulled me aside and were like 'do you have a polo on, like a collar on?' I said I'm covered up to my neck, what was I going to be like... 'oh yeah I have a bikini top under this, I'm going to strip it down?' I'm like no, I don't have a polo on. It's 40 degrees. They were like 'I don't know if we can let you play if you don't have a collar on.' I couldn't have been more covered up. What is it about a fricking collar?!"

What's the most shocking experience you've encountered at a golf club or country club? Share your thoughts over on the GolfMagic social media channels.