Paige Spiranac breaks down Jordan Spieth's win at RBC Heritage and claims she saw him hit one of the worst shots from a pro she has ever seen. 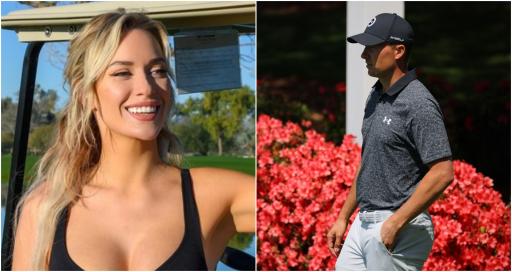 Paige Spiranac says she saw Jordan Spieth hit one of the worst golf shots she has ever seen from a pro as she revealed she once wasn’t his biggest fan because he was “whiney”.

In her latest podcast Playing A Round with Paige Renee, the social media sensation broke down Spieth’s most recent and 13th PGA Tour win at RBC Heritage.

Spieth needed a playoff to defeat Patrick Cantlay at Harbour Town Golf Links and his incredible victory came one week after he missed the cut at the Masters for the first time in his career.

The 28-year-old three-time major champion looked like he was going to be the next dominant force in golf when he won his first major in 2015.

But it's been an interesting career path from Spieth and one we did not expect to see. His struggles to find form have been well documented over the years.

Spiranac said: “I will say though, especially like in 2015, he was a bit annoying.

“I wasn’t the number one Spieth lover out there, you know, the way he would talk to his caddie he just seemed a bit whiney.

“And I was never, like, a big fan about that. And then, he kinda disappeared and he has come back and I’m like, ‘Okay yeah Spieth is really good for golf.’

“And it’s nice to have someone like that on top of the leaderboard. But, then, sometimes he’ll go back to being whiney again and I’m like, ‘Shut up, stop! You’re annoying, it’s annoying!’

She added: “I’m glad that he has had his comeback, I will say that. I’m glad he is playing well again, I’m glad that, relatively though, he has won twice [and] he kind of fought for this one [RBC Heritage].

“He was missing tap-in putts. He was looking pretty dicey there for a while so he’s still not the Spieth we know... came to know and love. And it’s kind of touch and go with him.”

She added: “It’s all mental with him. I feel like he is one of those players that is so mental, when he has his confidence and he is making putts he is unstoppable.

“But you can even see the way he’s tinkering with his swing and even when he was struggling, he was bad. It was brutal to watch him play.

“I remember watching him play a couple of years ago at Riviera and he hit a hybrid off the tee and it was one of the worst shots I have ever seen a professional hit.

“We’re talking 60 yards off line with a hybrid. With a hybrid! You could tell when he’s standing over any shot, he [did] not look comfortable at all.

“He had no idea if it’s going right or left and that is the worst feeling to have. When I was playing pro that was something I was struggling with.”

She added: “I don’t really know if he is going to win another major.”