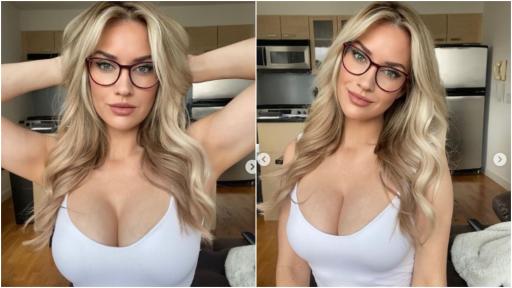 Golf social media sensation Paige Spiranac has wowed her Instagram followers with her latest post ahead of a big weekend on the PGA Tour and NFL Divisional Playoffs.

Spiranac, who has more Instagram followers than any other individual golfer including Tiger Woods with 3.2 million, is a Points Bet ambassador and so she asked her followers who they fancied to win each of the four NFL Divisional Round Playoffs this weekend.

She also has been giving her tips for this week's American Express on the PGA Tour, strongly fancying Abraham Ancer for the outright win and Seamus Power for an each-way spot.

"One of my favorite things is to post unrelated pictures and captions so with that said….we have the divisional round coming up!" Spiranac captioned her latest Instagram post.

"Bengals vs Titans, 49ers vs Packers, Rams vs Bucs, Bills vs Chiefs.

The former pro golfer also confirmed she was going to be using the new TaylorMade Stealth Driver, just as the likes of Tiger Woods, Rory McIlroy, Dustin Johnson and Collin Morikawa have chosen to do in 2022.

Last week, Spiranac fired shots at the Dallas Cowboys following their exit from the NFL Playoffs.

With eight teams left in the race for the Super Bowl, Spiranac says she will be routing for the Buffalo Bills, who took out New England Patriots last weekend.

Here's a look at some of the comments to Spiranac's latest post:

"Those glasses are fire."

"Chiefs going all the way, Paige."

"Packers for the win, no doubt about it."

"You are literally an idol."

"Wow, I haven't seen a phone hung on the wall in a long time."

"I've no idea who wins the NFL Playoffs, I'm too distracted at the moment."