Jim Furyk reveals the truth despite what Patrick Reed came out and said during the Ryder Cup. 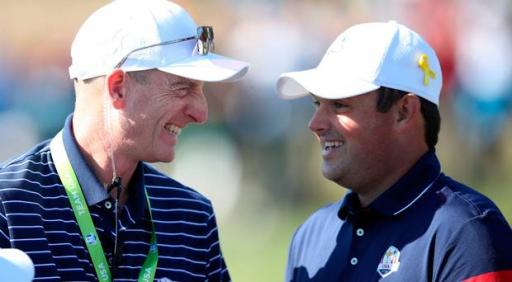 Jim Furyk has explained how Patrick Reed knew "weeks in advance" that he would be paired with Tiger Woods in the Ryder Cup at Le Golf National.

Reed last week said how he was "blindsided" when finding out that he would be split from Jordan Spieth during the week of the Ryder Cup.

The Masters champion also lashed out at Spieth in the aftermath of USA's heavy 17.5-10.5 defeat to Europe.

Did you know this rule about STANDING out of bounds with your ball in play?
Beef Johnston FIRES SHOTS at Piers Morgan over Ben Stokes England withdrawal

"When I started looking at who (Tiger) would pair well with, I kept coming back to Patrick Reed," Furyk told the Golf Channel.

"There was always the idea that we could go Tiger and JT (Justin Thomas), and Patrick and Jordan, but ultimately they knew going into the week, weeks in advance, they knew they would start the Ryder Cup with Patrick and Tiger being partners."

Furyk has also revealed Dustin Johnson and Brooks Koepka's altercation DID happen on the Sunday evening.

He's also explained exactly why two of his wildcard picks in Woods and Phil Mickelson failed to win a single point during the Ryder Cup.

Equipment news
Sik Golf Putter Fitting - Why should you get fitted for your putter?
Features
"English golf may be booming but course CLOSURES are happening all around us"
Golf news
WATCH: Schauffele, Thomas, Morikawa and Reed star in The Hangover
Golf news
Golfer sells his TaylorMade driver with UNTOUCHED sweet spot!
Golf news
Mini-Tour player shoots UNBELIEVABLE 57 at Las Vegas Golf Club