'Bones had been broken': Police on golf carts stop brawl at golf course in Stoke. 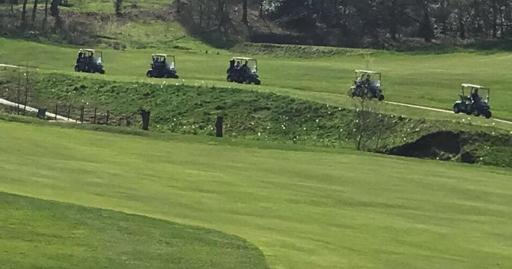 Tensions erupted into violence at Greenway Hall Golf Club in Stoke last week, and the result could have been much worse if not for the efforts of two local police officers and a couple of golf carts.

According to a report from Birmingham Live, police responded to reports of an assault at the golf club.

Upon arriving at the club, the cops hopped into carts, or "golf buggies" as they're known in the UK, in order to race to the scene.

Once there, authorities successfully put stop the brawl and arrested four men for suspicion of assault. An argument over slow play is believed to have led to the violent dispute.

Local commander John Owen told Birmingham Live: "I'm very proud of my officers. They've used initiative, gone to a fight (as we always do) outnumbered, and have resolved it resulting in peace and order. Hole in one I'd say!"

Despite the fact that police allegedly revealed that 'bones had been broken' and weapons may have been used in the altercation, all four men were later released without charges.