McIlroy not a fan of the way Trump is leading the United States during the coronavirus pandemic... 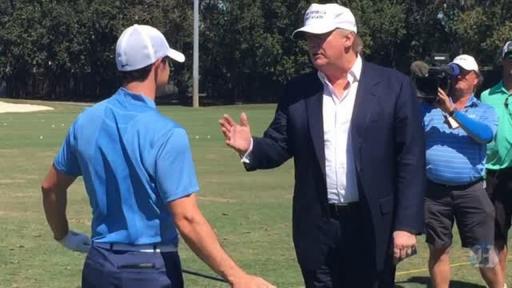 McIlroy, who once played golf with Trump in February 2017, was quizzed about the possibility of ever teeing it up with the United States President again in the future.

The Ulsterman, who now resides in Florida, was firm in his response.

"We’re in the midst of something that’s pretty serious right now and the fact that he [Trump] is trying to politicise it and make it a campaign rally, saying that the [United States] administers the most tests [for coronavirus] in the world like it’s a contest," McIlroy said on the podcast.

"It’s just not the way a leader should act and there is a bit of diplomacy that you need to show and I just don’t think he’s shown that, especially in these times.

“I don’t know if he’d want to play with me again after what I just said. I know it’s very self-serving of me to say ‘No’ and if I don’t, then it means then I’m not putting myself in position to be put under scrutiny and that I’m avoiding that.

"But I probably wouldn’t, no."

McIlroy was also asked to describe what it was like to play with him at Trump International in Florida more than three years ago.

"I’ll sit here and say that the day that I did spend with him and others was very enjoyable," said McIlroy.

"He’s very charismatic. He was nice to everyone. It didn’t matter whether you were me or the guys in the cart barn or the pro at the golf club.

"Whatever you call it but most people that he came across that day, he was cordial, he was nice, he was personable and that’s my only real interaction with him.

"So I will sit here and say that the day I had with him I enjoyed but that doesn’t mean I agree with everything.

"Or, in fact, anything that he says."