Tiger texting McIlroy at 4am 'pi**ing off' fiancee 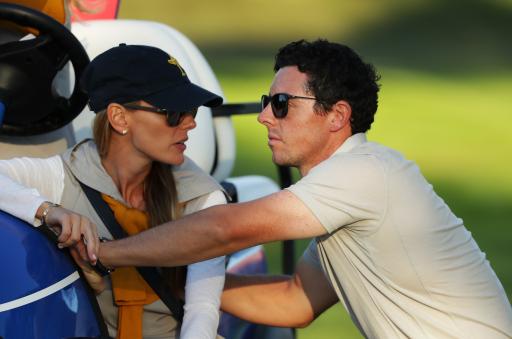 The four-time major champion sat down for an in-depth interview with the Sunday Independent, admitting he’s “drawn towards” his fellow Nike staffer.

“He’s an intriguing character because you could spend two hours in his company and see four different sides to him. When he’s comfortable and he trusts you - and his trust (sensitivity) is way (higher) than mine - he’s great. He’s thoughtful. He’s smart. He reads.

“He can’t sleep so that’s all he does - he reads stuff and educates himself on everything. But he struggles to sleep, which I think is an effect of overtraining, so I tell him to calm down sometimes. He’d be texting me at four o’clock in the morning: 'Up lifting. What are you doing?'"

"Erica actually got pissed off with it. He was texting me in the middle of the night and I was like, 'Tiger is in the gym.'"

McIlroy and Stoll are expected to marry in the spring in Ireland.

US PGA
Rory McIlroy gives hilarious answer to question after setting US PGA lead
US PGA
WATCH: Scottie Scheffler has temper tantrum at PGA Championship
US PGA
Struggle with short putts? Do not watch Will Zalatoris...
US PGA
Tiger Woods after Round 1 of US PGA: "Playing that kind of golf is gone"
US PGA
US PGA R1: Exhausted Tiger Woods struggles to keep up with Rory McIlroy