Phil Mickelson feels the United States have never been better prepared for a Ryder Cup.

Phil Mickelson believes the United States are more prepared than ever to win back the Ryder Cup under Davis Love, especially when he looks back 12 years to when the Americans were skippered by Hal Sutton.

Mickelson, who will compete in his 11th Ryder Cup match, was the catalyst for change following the United States' five-point loss to Europe at Gleneagles in 2014.

The five-time major champion questioned Tom Watson's heavy-handed approach to captaincy, even when sitting alongside him in a press conference two years ago.

Mickelson has been out in practice with Rickie Fowler, suggesting the pair may link up this week (Photo: Getty Images)

Lefty's revelations saw the PGA of America create a Task Force allowing for player involvement, and Mickelson has already seen improvements in the lead up to this year's biennial contest.

But having already blasted Watson's tactics in the past, Mickelson took aim at another former US captain.

This time in 2004 skipper Sutton, who was helpless in a devastating 18.5-9.5 victory for the Europeans - a scoreline representing the United States' worst ever result at a Ryder Cup. 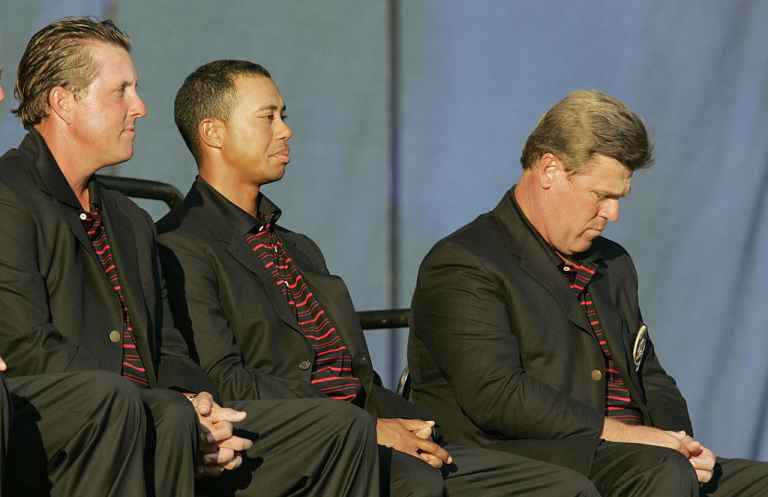 Mickelson has taken a dig at 2004 US captain Hal Sutton over a lack of preparation when it came to pairings (Photo: Getty Images)

"When you look back on what the difference is, when players are put in a position to succeed, more often than not they tend to succeed," said Mickelson.

"And when they are put in positions to fail, most of the time they tend to fail."

Mickelson does not entirely knock Sutton for his tactics, one of which was to partner Mickelson with Woods in the opening two matches (which they both lost), but he admits the former PGA and Players champion failed in his lack of preparation.

Learning how to hit a different golf ball, such as Woods' high-spin ball in relation to Mickelson's low-spin ball, took longer than 48 hours to master.

"We ended up not playing well. Was that the problem? I mean, maybe.

"But we were told two days before that we were playing together, and that gave us no time to work together and prepare."

He added: "In the history of my career, I have never ball-tested two days prior to a major.

Mickelson admitted he did not have enough time to get used to playing a different golf ball at the 2004 Ryder Cup (Photo: Getty Images)

"But that's an example of starting with the captain. That put us in a position to fail. And we failed monumentally, absolutely.

"To say, 'Well, you just need to play better,' that is so misinformed. Because you will play how you prepare."

Mickelson, who has played in every Ryder Cup match since his debut at Oak Hill in 1995, will attempt to win just his third Ryder Cup in 11appearances.