Scottish Golf needs to keep the buzz going 'once the circus is not in town'. 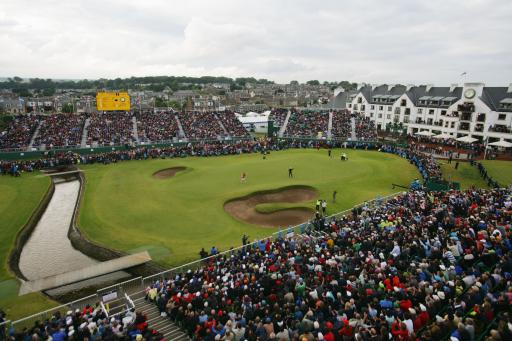 Scottish Golf needs to build on the momentum from the Scottish Open and Open, says chief executive Andrew McKinlay.

The back-to-back tournaments see thousands descend on Scotland, as the country becomes centre of the golfing world for a short time.

That energy must be harnessed in order to get more women and children involved, McKinlay says.

"We see this in tennis every year with the Wimbledon fortnight and we have to be very careful," McKinlay told the BBC.

"You absolutely need to make the most of it but you need to make sure you then keep that going when the so-called circus is not in town. That's the challenge. That is what our real role is.

"We're going to get loads of focus over these two, three, four weeks, so it's not hard for us to make the news at this time. It's the rest of the time when need to get out there and show what's going on, get kids involved and more women involved and show them how great a sport it is."

The aim is to get 15,000 more women and junior playing the game in Scotland.

While participation numbers are declining in the country, McKinley believes the sport is more accessible in Scotland than in many other countries.

"I actually think we have a much broader cross-section of our society playing golf than England or the States or many other parts of the world," he told BBC Scotland. "But we need to make sure it remains accessible.

"Access to clubs can be expensive but there must be so many of us that play golf that have a spare set of clubs in our garage or loft and I'd like to look at a way where we can free up some of those and get them recycled and back out there.

"So if anyone does want to pick up a golf club, I really don't want to see any barriers to being able to do that."