Sergio Garcia won his 16th European Tour title at the KLM Open, check out what he had in the bag during his win. 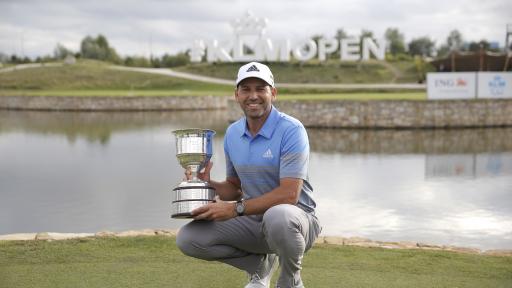 Sergio Garcia won his 16th European Tour title on Sunday with a one-shot victory at the 100th KLM Open in the Netherlands. It is now the third consecutive season that Garcia has won on the European Tour and it couldn't have come at a better time, after what has been a controversial year for the Spaniard.

Earlier this year, Garcia was disqualified from a tournament in Saudi Arabia for damaging the greens and followed that up with tantrums that were caught on camera at the Open in Royal Portrush and the WGC St. Jude Invitational.

Last week, we saw a much more composed Garcia who finished with a final round of 69 to beat Denmark's Nicolai Jojgaard by a shot. Garcia's last win came at the 2018 Andalicia Masters and since then has struggled to find his form, but after a successful week in Holland he is now back in the winners' circle.

Englishman Matt Wallace also had a fantastic week and looked back to his capable self, finishing in third after a final round of 68, while James Morrison finished fourth.

“We had a great week and great to win again,” Garcia said. “I played well all week under pressure. It wasn’t easy. There were a couple of tough moments today, but I hung on tough, that’s the most important thing.”

Garcia, who had his family watching on by the 18th green, was thrilled that his loved ones were there to see him win once again.

“It was honestly amazing to have my brother [Victor], Angela my wife, and little Azalea [Garcia's daughter] here. It’s very special.”

Sergio Garcia - What's in the bag of the KLM Open winner?