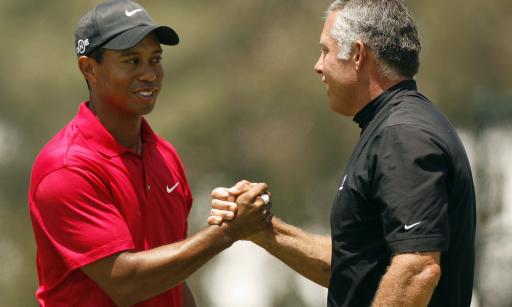 Tiger Woods' former long-time caddie Steve Williams has revealed a number of secrets about his old boss, most notably how many majors he planned to win.

Williams, who was on the bag of Woods for 13 of his 14 career majors, recently penned a piece for the Players Voice about Woods’ recent resurgence.

"Back when we were working together we’d often have this conversation about how many majors he wanted to win," said Williams.

"I believed that when he got to the target he wanted he would rack the cue – it’s just that we were always unclear on what that number would be.

Williams also reveals insight into the pair's dialogue during Woods' last major victory at the 2008 US Open when he practically defeated Rocco Mediate in a 18-hole playoff on one leg.

"That 2008 US Open was all about mind over body, " said Williams. "I’d never seen Tiger in so much pain.

"At one point in the second round he was visibly close to tears. He was a long way off the lead and I thought it was pointless to continue so I said to him, ‘Is it really worth it, Tiger?’

Williams also touched upon Woods' recent near-miss at the US PGA Championship when finishing runner-up to Brooks Koepka, a tournament where Woods fell out the blocks on the opening day.

"The other thing people noted about the US PGA was the fact he was 3-over par after just two holes on the first day and ended up losing to Koepka by two shots.

"This is one trademark of Tiger’s game that I remember well. He often made average starts to tournaments. That’s because, like anyone who takes pride in what they do, Tiger gets very nervous at the start of an event and it shows.

"He also knows all too well that you can’t win the tournament on Thursday but you can sure as hell lose it. That leads him to make a more conservative start to the tournament than some other players."