What do you make of Tiger Woods' latest golf rules flap at the Hero World Challenge? 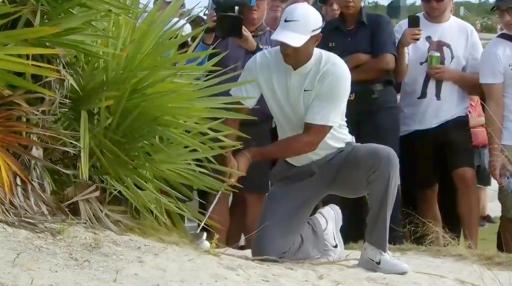 Tiger Woods was not penalised for double-hitting a shot out of the bushes on the 18th hole Friday, despite admitting to officials it WAS a double-hit after seeing a slo-mo replay.

Woods, who went on to finish 17th in the 18-man field, was not penalised because the HD slo-mo video replay was required to see the violation and the American couldn’t have been reasonably expected to detect the double-hit in real time.

The former world number one took a swipe at his ball off one knee with a limited backswing, and he managed to make contact and move his ball out into the rough.

It would result in a double-bogey and Woods was soon greeted in the scorer's hut by rules officials to review the shot. Watch it below...

"Did he hit the ball twice?"

It's been determined there's no penalty for Tiger Woods on the 18th hole. pic.twitter.com/xMCUAnBkcB

Woods either double-hit the shot or he had scooped the ball from under the bush - both of which would have resulted in a penalty.

Now this is where it gets complicated. According to the current Rule 14-4, if a player hits their ball more than once during a stroke, it's a two-stroke penalty. However, the new and improved Rules of Golf wipe out this rule - but that doesn't commence until January 1, 2019.

Rule 14-1a - Fairly Striking the Ball - states that when making a stroke the ball must be fairly struck at with the head of the club and must not be pushed, scraped or spooned. The penalty for that violation is also two strokes.

Following a lengthy review with Woods, officials determined that he had committed a double hit - BUT because they needed slo-mo HD video to see it, Woods was NOT assessed a penalty under Decision 34-3/10.

This decision states "a player’s reasonable judgement in making certain types of fact determinations will be accepted even if, after the player has made a stroke, video evidence shows that the player’s judgement might have been wrong, and video evidence that shows facts that could not reasonably have been seen with the ‘naked eye’ will be disregarded."

After his round, Woods admitted that the video review showed him hitting the ball twice, but because it wasn’t "discernible to the naked eye" he received no penalty.

Mark Russell, PGA Tour Vice President of Rules and Competitions said: "Tiger was under a bush and we did determine that he did make a stroke at it. He didn’t scrape or spoon or push the ball. And when he did that, Tiger said that he did not think he hit the ball twice. Looking at it in the regular speed on a high-definition television, you couldn’t tell that at all, but when you slowed it down to ultraslow motion high-definition television,you could see where the club [sic] did stay on the clubface quite a bit of time and it looked like he might have hit it twice, but there’s no way he could tell that.

"In this age of high-definition slow motion television, we’ve got a decision at 34-3/10, Limitations on Use of Video Evidence. Basically it says if the player did not know that he did that and the only way you can tell that is by using this type of slow motion technology, he’s exempt from the rules, so there’s no penalty there."

Previous
You HONESTLY won't believe what Ernie Els said of his own golf course!
Next
Jon Rahm: What's in the bag of the Hero World Challenge champion