Darren Clarke received one of the most peculiar penalties of all time on day one of the US Senior Open. 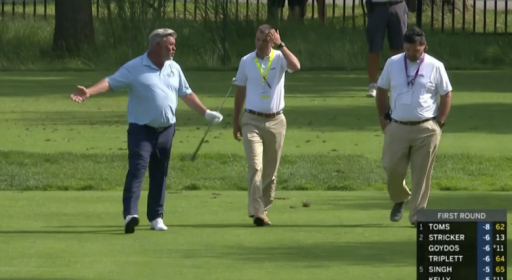 Darren Clarke received a two-stroke penalty during his US Senior Open debut on Thursday after his caddie attempted to remove a BIRDHOUSE in his player's line - and the former Open champion was FUMING!

Clarke made the turn at 1-under par but then sailed his tee shot way left into trouble at the 10th hole with his ball nestling in the fescue by the woods.

While in conversation with a rules official, Clarke's caddie attempted to remove a birdhouse that was in the Northern Irishman's line to the pin, which according to the rulebook, IS allowed under USGA Rule 15.2 on movable obstruction.

The only issue, however, is that althought the birdhouse might have been movable, it was technically immovable!

WATCH THE INCIDENT IN THIS VIDEO...

So in short, there was no relief for a birdhouse in line of sight.

Clarke was not informed of his two-stroke penalty until later in the round, and he was understandably angry by the decision as his bogey changed to a triple bogey.

He ended up finishing the day on 3-over par and 11 strokes off the pace.