A day in the gym with Under Armour athlete Jordan Spieth ahead of this week's US PGA. 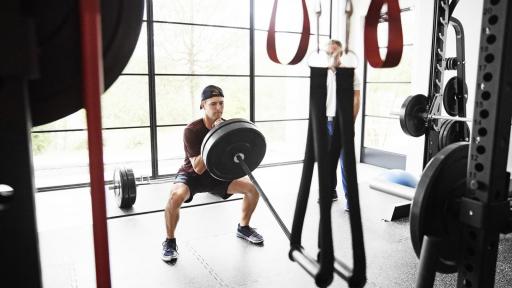 When you meet Jordan Spieth, what strikes you isn’t a win-at-all costs, day-in and day-out grind type of athlete. Calm, cool and unendingly polite, he smiles and introduces himself, a firm handshake belying a lean and lithe 6-foot-1 frame.

Those who know and follow Jordan would tell you, however, that behind that easy demeanor lies a ferocious competitor, hell bent on finding every possible advantage and exploiting it – a trait that helped him capture three majors before his 25th birthday.

Leading into the 2018 PGA Championship at Bellerive, and another go at the career grand slam, Jordan has been hard at work; work that starts in the gym.

Spieth and his trainer Troy Van Biezen recently opened a window to the world for a a peek into what training looks like for one of the elite golfers on the PGA Tour.

A focus on the lower body and core has made Jordan as explosive as ever, key for a golfer who generates power from the hips.

The more power that is generated through the lower body, the easier it is to use the upper body for control and hand speed, giving Jordan the ability to use his irons with pinpoint accuracy.

The results are coming. After a strong showing at the Open Championship at Carnoustie that ultimately fell short on the final day, Jordan was back in the gym, focusing on the PGA Championship.

Resistance training with core stabilization, Bulgarian squats, deadlifts, box jumps and much more dominate Spieth’s workout to ensure he can perform at his peak for four rounds.

“I feel as physically fit this time of the year as ever…as far as how I feel this late in the season, it’s the best I’ve ever felt,” said Spieth.

Jordan and Troy have zeroed in on a program and approach focusing on mobility and flexibility to give him a leg up in some of the most pressure-filled situations in sports.

Jordan needs to be able to have complete focus when all eyes are on him, which means minimizing physical distractions including fatigue.

Body fatigue in golf can drastically affect mechanics and results, a key reason why Jordan must maintain the best physical condition to challenge like he does almost every week.

“I can go and do a simple warmup in the gym and I just feel better if everything’s activated,” said Spieth. “Golf-specific training is different from other sports. We aren’t looking to bulk up…but at the same time we need more mobility and flexibility.”

He may look like a mild-mannered, easy-to-like Texan, but don’t be fooled. Jordan Spieth puts the rest of the field on notice every week, backed by WILL and hard work.