Golfer loses his rag as he fights for his PGA Tour playing rights. 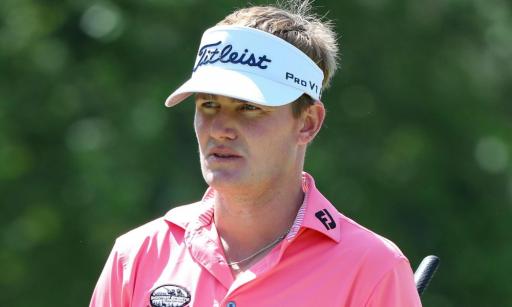 Making the PGA Tour isn't easy. Just ask John Peterson who was caught letting his frustration out on the 15th green at this week's Nationwide Chidren's Hospital Championship this week, the first of four Web.com Finals events.

Watch the American lose his rag after holing his THIRD PUTT on the 15th green, snapping his putter over his knee.

the evidence is mounting that John Peterson does in fact care about golf pic.twitter.com/mUL455pWiq

Peterson has been in and out of headlines all year as he teeters on the edge of PGA Tour status and has made his intentions clear: if he loses his status, he will retire at age 29.

“Don’t care either way bud. I hate the tour life. Not how it looks from the outside,” he wrote to one fan on Twitter earlier in the season.

Twenty-five pros will earn their cards at the conclusion of the four events. “Gonna give this pro golf tour deal one last push,” Peterson wrote in the leadup to the event.

Despite breaking his putter on the 15th hole - having started on the 10th - Peterson turned to his wedge and found greater success. He made two-putt pars on 16, 17 and 18 using the belly of the wedge.

“Should’ve seen how nice I rolled it after that with the 52 degree,” Peterson tweeted. He finished his round very respectably, notching three one-putts and not a single two-putt with the wedge. He finished with a first-round four-over 75.