WATCH: We have no idea how THIS swing makes contact with the ball?!

One of the most bizarre golf swings you will ever see, but it works... 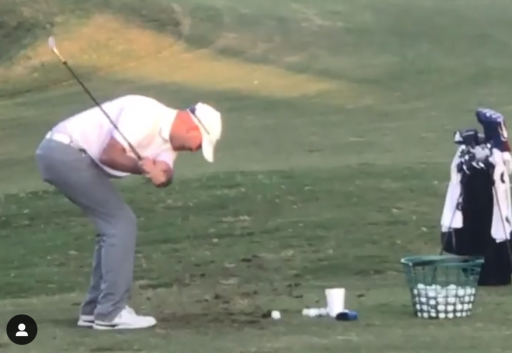 The beauty about golf is that every golfer's swing is unique in one way or another, especially when it comes to us average hacks. Just hitting the golf ball solidly and where we intended to hit it is all many of us care about, no matter what the swing actually looks like to the eye.

Golf coach Steven Boo showed exactly that in one of his latest social media posts...

Now we are fairly certain this isn't Steven's real swing, or at least you would like to think so as golf instructor at The Golf Club of Tennessee.

His caption hopefully clears that up: "How to shallow and get that shaft vertical in the same swing [laughter emoji]."

No matter how bizarre this swing looks though, it clearly works judging by the end result.

The downward move at the start is not too dissimilar to that of Alex Noren's pre-shot routine, which is an exaggeration of what he wants to do. According to the Swede, it gives him "the feeling that he wants at the hitting zone."

"They don't ask how, they ask how many," read one comment about Boo's bizarre swing.

Another golfer wrote: "In all fairness, this looks like a pretty functional motion. I bet's a decent player."

One golf fan said: "I thought that was Alex Noren for a second then!"

It just goes to show no matter how many laughs you get when it comes to your own swing, as long as it works for you then that is all that really matters.

You don't paint pictures on a scorecard, as they say.