Woods not reaching for driver at Carnoustie, 'hit 3-iron 333 yards'

Tiger says shots are rolling out 80 yards at Open venue. 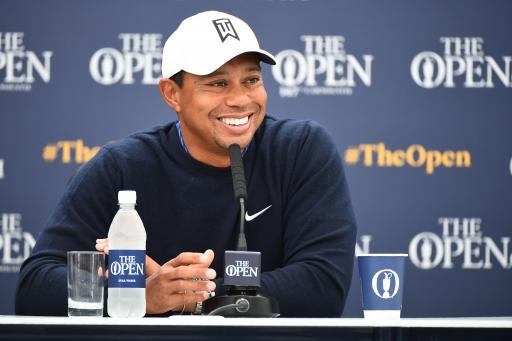 Tiger Woods will not be reaching for the driver much at Carnoustie this week – there's no need when he's bombing his long irons over 300 yards.

"There are not a lot of opportunities to hit the driver because the ball will be rolling 80 yards so it will be hard to keep the ball in play: even hitting four and five irons are running 50 to 60 yards.”

The UK has been basking in a heat wave and Carnoustie’s fairways are baked a straw colour, with Woods saying they are “running faster than the greens”.

The 14-time major champion is therefore making the most of practice rounds in order to dial in his numbers due to the exaggerated roll.

"The idea of these practice rounds is to get a feel of what I'm going to do,” he said. “It can get quick out here - you are going to seeing (sic) a lot of guys hit the ball a long way with not a lot of club."

Woods, who last won a major in 2008, believes the Open offers up his best opportunity to add to his tally.

"As far as long-term certainly I would say 'Yes' because of the fact you don't have to be long to play on a links-style golf course," he added.

"You get to places like Augusta where it is just a big ball park and the golf course outgrows you unfortunately. A links-style golf course you can just roll the ball.

"Distance becomes a moot point on a links golf course. Creativity plays such an important role."

Tiger Woods
Carnoustie
driver
The Open
Previous
30 players have drivers tested by officials at the Open
Next
The 2018 Open: groups and tee times

DP World Tour
Ian Poulter mocks Viktor Hovland with funny comment on Instagram
PGA Tour
Tiger Woods: NFL star Deebo Samuel shows he's a big cat fan
PGA Tour
Hideki Matsuyama hits shot of the year so far to win Sony Open
PGA Tour
Bryson DeChambeau on Cobra Golf: "We came to a bit of a sticking point in 2021"
Golf news
WATCH: This is EXACTLY what it's like when going on a "FUN" date to Topgolf