"Your dad sent me a DM on IG": Paige Spiranac involved in Twitter beef

Perhaps Paige Spiranac will be involved in a grudge match with Hailey Rae Ostrom? 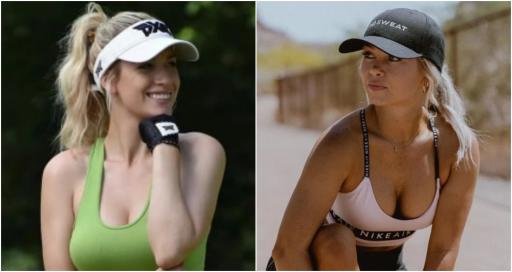 Paige Spiranac got herself involved in a bit of a dispute with fellow social media influencer Hailey Rae Ostrom.

We've seen our fair share of feuds in the golf world. Like many other sports, they can be faked to hype an event.

Think of two prize fighters saying how "it really is personal" before trying to leather each other for 12 rounds inside a boxing ring.

So perhaps it could be said that social media heavyweight Spiranac and Ostrom could be setting up for a grudge match.

Brooks Koepka versus Bryson DeChambeau part two? Forget that. It's time for Spiranac against Rae Ostrom.

We should say that this all ended - at the time of writing - "privately" between the two over DM. Still, it was a lot to take in.

More: Paige Spiranac in top to of "most trolled" female athletes

It began when Amanda Rose, the co-host of Spiranac's podcast, posted her support for Tiger Woods being inducted into the Hall of Fame.

Then Rae Ostrom appeared to take objection to that.

This led Rose to point out a pinned Tweet from Rae Ostrom. That led to more objection from Rose.

Rae Ostrom fired back, saying it was a joke.

That brought out Spiranac and the two traded blows for a bit until it all calmed down. We think.

Ceasefire on the firing line, then.

Tiger Woods might be the ultimate girl dad. Even greater than his golf legacy may be the father he is.

Very cool to hear his daughter will introduce him at his World Golf HOF induction ceremony.

Ehhh I have a bit higher expectations for a “great Girl Dad”. Love Tiger today but we can’t disregard 2009. I believe a Girl Dad should be a walking example of the kind of man their daughter deserves. My own dad set the bar pretty high. Tiger is not in that same category.

Sex is cool and all but consider this: you wake up and the sun is shining. You put on your Sunday best, grab a fresh glove and new sleeve and drive to the course. You warm up and you’re puring everything. Your putter can’t miss. You shoot your lowest round ever. #golf

“Sex is cool and all” isn’t that the pinned tweet on ur profile I’ve never seen before? Ehhhh I have a bit higher expectations for someone who is being so judgy

Her dad said I was a bad role model and put me down for how I built my business. I’ve had them both blocked for things that they have said about me. It’s easy to pass judgment but it shows great character to learn from mistakes. Calling someone you don’t know a bad parent is low

I’ll just be here I’d love to know what I’m being tagged in though. pic.twitter.com/ta8yILICHb

It’s time to retire the victim card. Neither of us ever put you down. My dad doesn’t even have a Twitter lol. I also never called Tiger a bad parent. Your entire tweet is a lie. Release our private DM’s and everyone will see our exact convo and why you blocked me. @PaigeSpiranac pic.twitter.com/OniGgW54bB

It’s easier to play victim. To say me and my dad (?) were mean. But in reality, you and I had a SIMPLE difference of opinion regarding feminism (which is laughable). You blocked me after a private conversation in dms. I never called you a name. Never put you down.

No victim, don’t deal with fake. Your dad sent me a DM on IG. This has nothing to do with the conversation we had but the comments you have made behind my back. You told Amanda women shouldn’t put other women down but you seem to have a lot to say about me to other people.

We can disagree on a topic (esp one that has nothing to do with us personally), and still lift each other up in the industry. We already have enough obstacles in a male dominated field. I wish you nothing but success.

At the end of the day this is something that happened in 2018/19. I know you were offended by a comment I made, regardless if it were about you or not. I genuinely apologize for offending you. We have the same overall goal in this sport and that is to grow the game.

Last thing then I’m done with this topic: if anyone ever disagrees with my opinion on something, I would genuinely love to hear your thoughts. I don’t believe im always right. I will continue to try & make this game inclusive for all.

Next page: Paige Spiranac says hard with "these jugs" to play golf