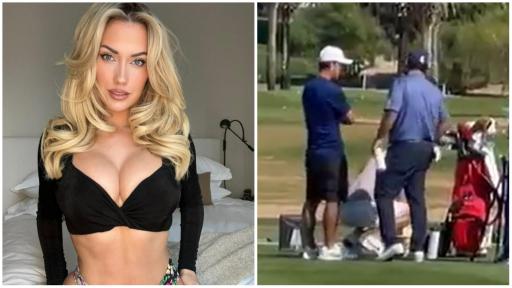 Paige Spiranac has made fun of the whole Rory McIlroy vs Patrick Reed tee flick controversy ahead of this week's Dubai Desert Classic after revealing a disgraceful direct message that was sent to her by one of her fans on social media.

Spiranac, who last week opened a new 'OnlyPaige' fans website, responded to a comment that said she should "flick a tee" at the poster of one of her latest shocking DMs, which she revealed in detail on Twitter.

This guy sent me a DM saying “you make my cock busy through my pants” then another that said “how embarrassing I meant *bust!” How was the spelling error the most embarrassing part lol

"This guy sent me a DM saying “you make my cock busy through my pants” then another that said “how embarrassing I meant *bust!” How was the spelling error the most embarrassing part lol."

One of her followers replied:

"Flick a tee at him [crying laughter].".

"I’m going to carry tees with me wherever I go now lol."

This all comes off the back of news that Reed threw a golf tee in the direction of McIlroy on the range at the Emirates Club after the Northern Irishman blanked the American following his ties to LIV Golf.

The 'Rory vs Reed Teegate' has also got the likes of PGA Tour players Max Homa and Collin Morikawa involved on the action.

Reed, who missed the cut in Abu Dhabi last week, is of course not only an Honorary Lifetime Member of the DP World Tour but he is now a LIV Golf player.

The next court hearing to determine whether or not LIV Golf players can continue competing on the DP World Tour takes place in a few weeks.

Rory McIlroy plays down talk of a confrontation with Patrick Reed ahead of this week's Hero Dubai Desert Classic.pic.twitter.com/LwT9faQvlQ

Controversy has surrounded the start of this week's tournament in Dubai as a result of Reed throwing a golf tee in the direction of McIlroy, who completely shunned the American as he went to shake his hand.

Reed shook the hand of McIlroy's caddie Harry Diamond and wished them both a 'Happy New Year', even though it was January 25, but McIlroy would not bat an eyelid as he is fuming with Reed.

This is seemingly as a result of Reed not only being a LIV Golf player but because McIlroy was "psubpoenaed by his lawyer [Larry Klayman] on Christmas Eve."

READ MORE ABOUT ALL THAT HERE

And then PReed tossed a tee in his direction like a 12 year old after mom said no more range balls. pic.twitter.com/NLa3lFamX0

You can also check out McIlroy's utterly brilliant reaction to a Patrick Reed question here.

To add to the drama, Reed called McIlroy an "immature little child" after the incident earlier today.

Not seen what happened yet? This is the video for you!

Next Page: Rory confirms Sergio should NEVER be picked for the European Ryder Cup team